It can be difficult for an individual investor to keep close tabs on Veolia Environnement (OTC:VEOEY). Since its delisting from American stock exchanges, its data isn't available on most finance sites, and even if it were, the company is a multinational behemoth with operations across several industries.

But after sifting through the evidence from Veolia's second-quarter earnings release, I'm comfortable making the following claims: It looks as if Veolia's business is stable, and profit growing due to strict cost-cutting and the company's aggressive approach to paying down debt. As a result, Veolia's dividend -- the carrot that gets many investors to buy the stock -- looks poised to grow in the years to come.

The business is stable

Since an excessive growth spurt in the early 2000s that saddled the company with crushing debt, Veolia's main focus has been on cutting costs. Usually, investors needed to be content with revenue that was -- at best -- falling by the low single digits.

But Veolia appears to be turning a corner now, as revenue actually grew during the second quarter (albeit by a slight 0.1%) at constant currencies. Investors should take solace in the move, especially when we consider the drag that low energy prices and stagnant construction in Europe have on the company's top line. If we back out energy prices and construction revenue, revenue actually grew 1.9% during the quarter.

As cost-cutting has taken hold, earnings have improved at a much faster pace. The best way to understand this is by breaking down results for EBITDA (earnings before interest, taxes, depreciation and amortization) by geographic region. 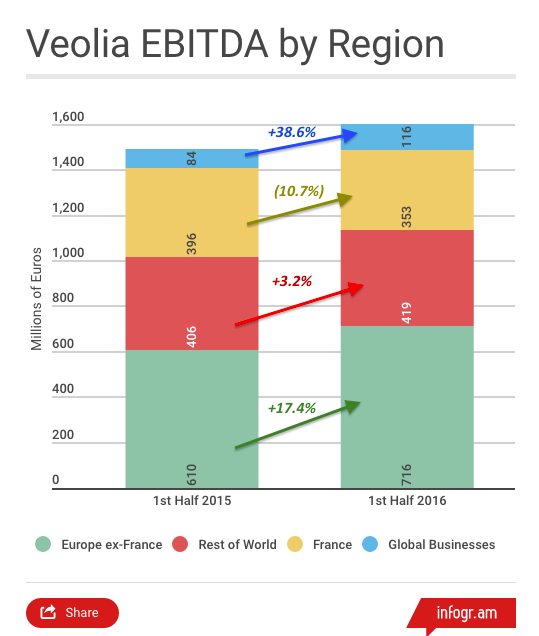 Data source: Veolia investor relations. 2016 figures are based on what the results would have been at constant currencies.

Clearly, the most important segment of these three was the "Europe" category. While revenue was actually down 0.3%, the company was able to grow the bottom line by an astounding 17%. That was largely due to "significant cost reductions, [and a] favorable weather benefit."

France was the most disappointing segment. Revenue itself was down only slightly, by 0.2%, but the company suffered losses due to contract renegotiations and the upholding of the Brottes Law -- which makes it illegal to cut off water to customers even if they cannot afford to pay for it.

It should also be noted that the company's long-term debt load now stands at 8.7 billion euros. That's down almost 50% from the 17-billion-euro hole it dug for itself during the darkest days of the Great Recession. In addition, the company has already recognized 121 million euros of gross savings -- well ahead of its schedule to realize 200 million euros in savings by the end of the year.

The company also sees itself, in the near future, selling its Transdev division to Caisse des Depots for roughly 560 million euros. Currently, there's a draft agreement in place, and Veolia expects to realize a capital gain of 220 million euros from the sale in 2016, with the rest soon to follow.

All of these factors have combined to offer investors some exciting news: "From 2016-2018, the Group expects to be able to provide around 10% annual dividend growth, while reducing the payout ratio."

You read that right: Not only does Veolia expect to raise its fat dividend, but it expects to use less of its cash flow to do so -- making it a much healthier payout. Because Veolia's dividend is paid in euros, the company's current yield of 0.70 euros per share equates to about $0.78 -- or a 3.5% yield at today's prices.

Overall, that's easily the best news Veolia investors could hope for -- and remember that any weakening of the dollar relative to the euro will only boost those yields.