Please ensure Javascript is enabled for purposes of website accessibility
Log In Help Join The Motley Fool
Free Article Join Over 1 Million Premium Members And Get More In-Depth Stock Guidance and Research
By Nicholas Rossolillo - May 16, 2016 at 10:14AM

This French-based environmental-services company has given a nice return to shareholders in the past year. Is it too late for investors to buy in?

So you're interested in a company that's based in France? Well, shares of environmental-services company Veolia Environnement (VEOEY 0.20%) have had a nice run in the past year. Here's a chart of share prices since the beginning of 2015, a year-and-a-quarter stretch that's been less than stellar for most. 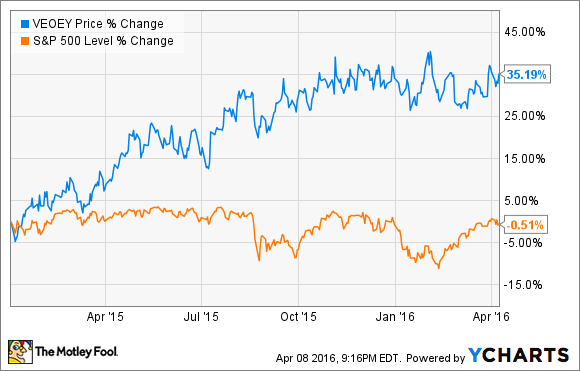 The ultimate questions for investors are what has caused the rise in prices and whether the momentum will continue. Let's consider what the company does, how it has performed financially, and how its stock compares with the competition.

What is Veolia Environnement?
The company operates three divisions: water, waste, and energy. Its water services division offers wastewater treatment and water distribution systems, as well as the construction of these systems. The waste services segment collects and processes household and industrial waste. The energy division develops management and integration systems for heating and cooling networks, industrial utilities, and public roadway electrical systems.

About those stock returns ...
So how did the stock arrive at current levels in the past year? Let's compare 2015 results with those of 2014:

While Veolia saw modest gains in revenue and costs, operating income and net profit soared over the course of the year. The spike in operating income, which translated into higher net profit, is attributable to a reduction in impairment losses on goodwill from purchased companies and in intangible assets, as well as property, plant, and equipment. There were high costs in these areas in 2014 from writedown costs in Central Europe, China, and Portugal, as well as an impairment in the value of subsidiary businesses. The company attributes these changes in 2015 to improving business conditions, especially in Europe, and one-time items in 2014 that hurt the bottom line.

A comparison against competition
With the company's profits improving and the stock price rebounding, should investors buy in? Let's look at some competitors and do a side-by-side comparison:

In the last 12-month period, Veolia has mostly underperformed its peers on net profit and return on assets, a measure of how efficient the company is at using assets to generate profit. Other environmental companies, however, have very high current valuations as measured by their PEG ratios (forward price-to-earnings divided by expected earnings growth). Veolia, by comparison, has a lower PEG ratio, indicating a lower price for future growth expectations over the premium paid for future growth of comparable companies. In the meantime, Veolia also pays an above-average dividend currently floating around 3.5%.

Despite the nice run over the past year or so, I believe the company has more room to improve fundamentals. With the recent sale of less profitable segments in higher risk areas of Europe, reduction of debt, and the global energy and commodities industry starting to show signs of recovery, the company has emerged leaner, more profitable, and in a good position to focus on higher profit geographic regions. As a result, the stock should outperform those of competitors in the years to come.

Why Veolia Is Poised to Outperform