What: Shares of the drugmaker Perrigo Company plc (NYSE:PRGO) fell by more than 10% today on exceptionally high volume after the company released its second-quarter earnings report that missed analysts expectations for quarterly earnings per share. Specifically, Perrigo reported adjusted diluted earnings per share of $1.93 for the three-month period, missing the Street's consensus figure by $0.05.

While Perrigo did top consensus for its revenue in the second quarter by $50 million, this silver lining was offset by the company issuing yet another hefty downward revision for its 2016 annual guidance. As a result of increasing competition and price erosion for its prescription pharmaceutical segment, the drugmaker is now projecting adjusted earnings per diluted share in the range of $6.85 to $7.15 for the whole of 2016, compared to its former guidance of $8.20 to $8.60 per share.

So what: Perrigo's shares have been spiraling downward ever since management convinced shareholders to reject a $26 billion bid from Mylan NV last November. 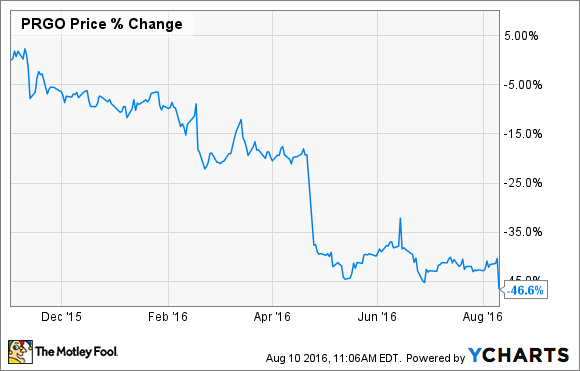 So, in retrospect, Mylan appears to have dodged a bullet at the expense of Perrigo's shareholders.

Now what: How much farther Perrigo's stock will fall is anybody's guess. After all, this is the second time the drugmaker has significantly lowered its guidance this year as result of falling prescription drug sales. So, until management gets a better handle on where this struggling business segment is heading, I'd avoid trying to catch this falling knife.

Of course, Perrigo could fetch another buyout offer in the interim -- especially now that its value has basically been cut in half -- but that's not a solid reason to invest in any stock. And it's hard to imagine a rival drugmaker making an offer that would top Mylan's former bid at this point -- a bid, mind you, that shareholders previously found to be inadequate.