ExxonMobil (NYSE:XOM), Eaton Corp. (NYSE:ETN), and Nucor (NYSE:NUE) are all off their highs at a time when the broader market is hovering near its all-time records. One big reason is that each is in an out-of-favor industry. But these may well be three hated dividend stocks to buy now for long-term investors.

ExxonMobil just reported dismal earnings, with second-quarter results down 60% year over year. Earnings were down a similar amount through the first half, relative to 2015, too. That's an ugly performance, led by the still relatively low price for oil. It was, on some metrics, the company's worst quarterly performance in over a decade. You can understand why the stock is off nearly 20% from its 2014 highs, before the oil decline began.

The shares, however, yield around 3.5%, toward the high end of this global oil giant's historical range. That's an enticing yield in a low-yield world. And Exxon has been one of the best-performing oil companies during these dark days for oil. For example, competitor Chevron (NYSE:CVX) just posted its third consecutive quarterly loss. Worse, Chevron and follow giant Royal Dutch Shell (NYSE:RDS.B) have both hit the pause button on dividend increases -- Exxon just upped its dividend for the 34th consecutive year in April. 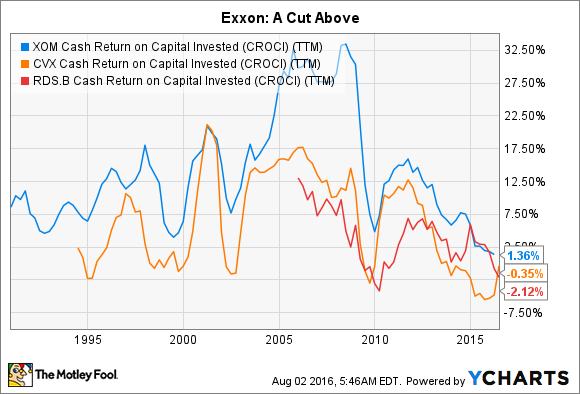 So the oil business is tough these days, but Exxon is surviving better than its peers. That's why you might want to take a risk and buy in. You can assuage some of your concerns with the impressive dividend record. But more important is that Exxon has a long history of investing its capital wisely, usually leading the pack on return on capital invested. Basically, it does things better than most of its peers, and that's the key fact backing its relative outperformance on the earnings and dividend front.

Industrial pain in the ...

Global industrial giant Eaton Corp. is about 20% off from its 2014 highs. The big reason is the relatively weak economic picture throughout the world. Key factors hampering Eaton's results have been China's slowing economic growth and the steep fall-off in spending in the mining and oil exploration businesses. In fact, Eaton expects organic revenue growth to be down as much as 4% this year.

That's not an inspiring outlook and helps explain the share-price weakness relative to the broader market. It also helps explain the roughly 3.5% yield. Like Exxon, however, that's toward the high end of Eaton's historical range. And while the company's top line has been weak, it has been working hard to cut costs to protect its profit margins. For example, despite the revenue strains, the company still expects to earn between $4.20 and $4.40 a share in 2016, roughly in line with operating earnings of $4.30 a share last year. In fact, Eaton is so confident in its future that it raised the dividend in February.

The interesting things is, assuming that Eaton can earn the $4.30 midpoint of its earnings guidance, it still has plenty of room to support its annual dividend of $2.28, and to keep increasing it in the future. Moreover, with the stock off from its highs, the company has been returning value by buying back its own shares. The goal is to repurchase $3 billion worth of stock between 2015 and 2018 -- and it's well into that process. Although a slowing world is bad news for Eaton, it's holding up well, and you might want to do a deep dive to see if this industrial giant is right for your portfolio. 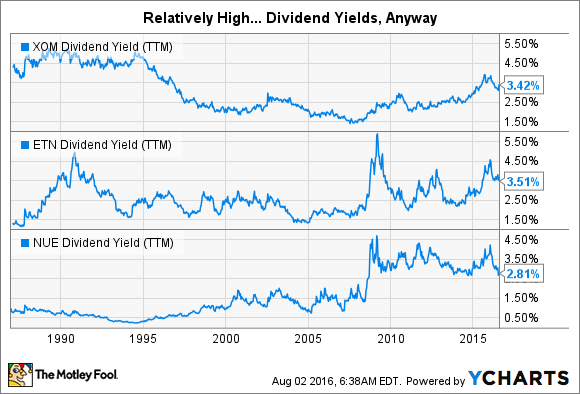 Starting to look up

The last hated dividend stock to consider buying now is Nucor, one of the country's largest steel mills. That's been a tough business since the 2007-to-2009 recession because of falling steel prices and intense competition from foreign imports. That helps explain why Nucor's shares remain 35% lower than they were a decade ago.

But here's the thing. Nucor has managed to keep its head above water better than its peers. For example, ArcelorMittal, United States Steel, and even Steel Dynamics have bled red ink on and off since 2009, when Nucor, like most of its peers, posted a loss. Unlike these peers, since 2009 Nucor has been solidly profitable. And its streak of annual dividend hikes remains intact at 43 years.

One of Nucor's key differentiations is its cost structure. For starters, it uses flexible electric arc furnaces and is vertically integrated, helping to keep operating costs and input costs under control. But one of the biggest differences between Nucor and peers is that it has a success-based pay structure that trims payroll costs during the lean times. That's been a huge benefit of late and will continue to be one in the future.

While the 2.8% yield isn't as high as Exxon's or Eaton's, it's still toward the high end of Nucor's historical range. And now is a good time to start looking at the steel sector, because after a string of tough years, steel prices appear to be starting to firm up. Surprisingly, in the long-suffering steel industry, time could be of the essence here.

Love to hate them

Exxon, Eaton, and Nucor are all out-of-favor names today. But their solid yields and strong performance in the face of adversity makes them enticing options for dividend investors willing to take a long-term view and buy top-notch companies when investors are hating on their respective sectors. If you're looking for dividends today, skip past the companies hitting all-time highs and take a look at this trio.