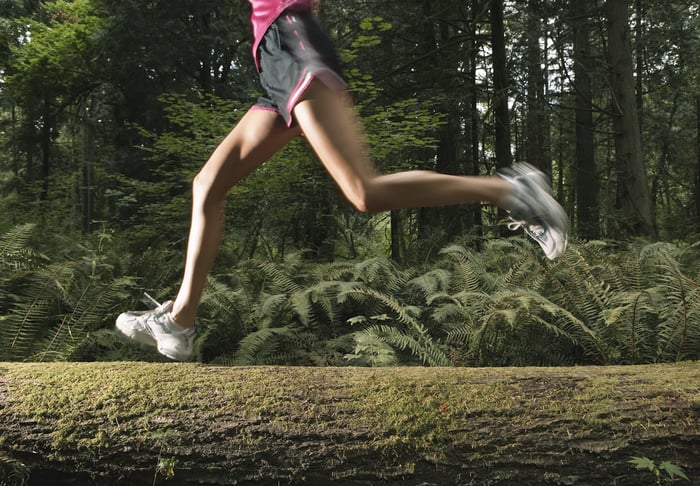 For the fourth quarter and full fiscal year 2016 ended May 31, Nike, Inc. (NYSE:NKE) reported just 6% growth in revenue year over year for the quarter, and profit was down 2%. For the year, however, profit grew 15% over fiscal 2015. The mixed bag of earnings have a lot of interesting takeaways -- here are three that will help to clear things up, and what to watch in 2017.

One way Nike has been able to grow earnings in the past few years is by increasing gross margin. Nike's gross margin is one of the highest in the industry now, at around 46.2% for the year. Gross margin did fall slightly to 45.9% in the fourth quarter, which was partly to blame for the Q4 earnings decrease. That seems to be because of an overstock of inventory, which Nike management said during the call it's working to correct.

Nike has been successful at growing margins by increasing average selling prices of its products, as well as getting more sales through direct-to-consumer channels as opposed to through third-party retailers that take a cut of the sale. For 2017, Nike is likely to continue increasing its gross margin even further, thanks to an increased focus on these direct-to-consumers sales.

"The investments we make in mobile and online experiences are paying off," Parker said during the call. In fiscal 2016, Nike grew e-commerce sales 51% over the prior year. That's expected to grow in 2017 as Nike.com goes live in 20 new countries, bringing the websites total reach to more than 40 countries. Nike also launched its new Nike+ app in July, which gives personal recommendations based on activity and seeks to draw more mobile sales.

Another reason for Nike's flat Q4 earnings but great full-year growth was the company's fluctuating tax rate. Nike's tax rate is affected by the percentage of sales from foreign markets, which generally have a lower tax bill, as well as other cash-handling operations such as repatriating foreign sales or leaving them in the host country for local investment.

For the fourth quarter, Nike's effective tax rate was over 21%, compared with 17.8% in Q4 2015. Management said that was primarily due to "adjustments in the prior year to reduce tax expense recognized in the interim quarters of fiscal 2015 on intercompany transactions," which likely relates to repatriating money from foreign accounts. For the full year, Nike's tax rate was just 18.7%, compared with 22.2% in the prior year, which Nike attributes to a higher mix of international sales.

Nike's tax rate could be one of the most important things to watch in 2017. As of now, it forecasts a tax rate between 19% and 21%. That will be an especially interesting point to watch during this presidential election year.

3. China continues to be huge for Nike

Speaking of foreign sales growth, China continues to be the most important growth market for Nike, and these earnings proved that again. During the year, Nike grew sales in China 27% year over year to $3.8 billion, making it Nike's largest region by sales outside the U.S., accounting for 13% of total sales.

Nike's China opportunity is growing. Thanks to a burgeoning middle class and affinity for basketball, sales growth in China could continue for a long time. During the earnings call, Nike CFO Andy Champion said: "China continues to be one of the world's largest and fastest-growing markets in terms of consumption. And Nike is unequivocally the leading Brand in China as we continue to fuel the Chinese consumer's passion for sport."

Final lesson: Hold on through a bumpy short term

"In the near term, we know there are certain areas where we have work to do," Parker said during the call, "but nobody is more demanding of our business than we are internally. And while outside of Nike we face macroeconomic and geopolitical volatility, our complete offense gives us our greatest competitive advantage. It's how we drive profitable, sustainable growth in the near and long term."

Nike's mixed fourth-quarter and 2016 earnings gave many analysts pause, wondering if the company could continue to grow in light of increased competition from younger companies such as Under Armour (NYSE:UAA) (NYSE:UA) which grew revenue 28% during the same quarter. Q1 is expected to get even worse. Nike management warned that Q1 gross margin is likely to decline by as much as 100 basis points and that foreign currency fluctuations and a strengthening dollar are going to continue to hurt foreign sales through Q1 and Q2. Expect many analysts to continue questioning Nike's long term potential following Q1.

Even so, Nike is forecasting sales and gross margin to turn around in the second half of the year for high-single-digit sales growth in fiscal year 2017 and increased earnings. With a focus on direct-to-consumer and more international sales led by a growing Chinese market, Nike still looks to have plenty of growth ahead.