What: Shares of nitrogen fertilizer company CVR Partners (NYSE:UAN) collapsed over 10% last month after the company released second-quarter 2016 earnings. Investors are no doubt drawn to the company's MLP status, so announcing a distribution of $0.17 per share -- the second-lowest in its life as a publicly traded entity -- likely didn't help.

So what: The second quarter was productive. CVR Partners closed its acquisition of fellow nitrogen fertilizer producer Rentech Nitrogen Partners on the first day of the quarter. While that will add diversification to operations from a geographical standpoint (previously, the company had one manufacturing facility) and has the potential to boost the top and bottom lines, investors learned that it comes at a cost. 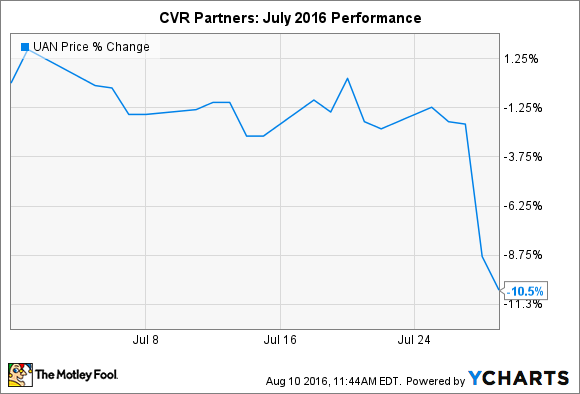 During the quarter, CVR Partners spent $6.6 million on scheduled turnaround maintenance at Rentech Nitrogen Partners' East Dubuque facility (which encountered operating issues prior to the acquisition) and swallowed a net charge of $13 million on asset adjustments related to the acquisition. Those charges and increased operating expenses, coupled with challenging fertilizer markets, swung the company to a net loss of $17 million for the quarter.

That's not good for a company that's supposed to minimize costs to boost the payout it can achieve. These factors resulted in a distribution of just $0.17 and a swift plummet in share price. While the distribution changes from quarter to quarter, holding steady at $0.17 represents a yield of over 15% at current prices. Of course, higher yields are usually the hallmark of riskier investments, and CVR Partners is no exception.

Now what: Management explained that financial decisions made in the second quarter that negatively impacted earnings were necessary and short-term headwinds related to the acquisition -- and it may be right -- but that doesn't help the headwinds caused by multiyear low fertilizer prices. Given the high level of risk associated with CVR Partners stock, investors are likely better off sitting this one out.