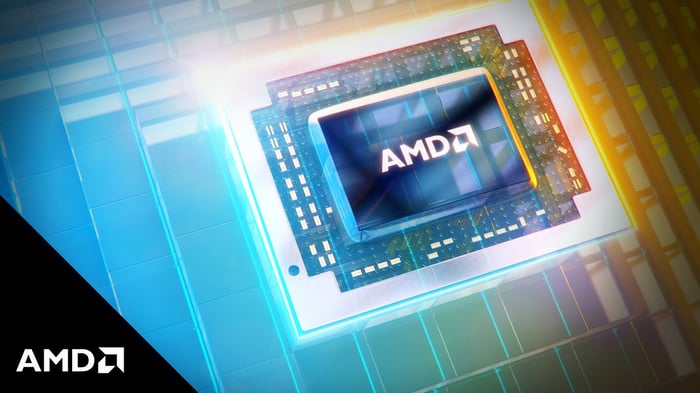 What: Shares of Advanced Micro Devices (NASDAQ:AMD) rose 33.5% in July 2016, according to data from S&P Global Market Intelligence. Some of the boost came from a solid second-quarter report and all the analyst love that followed. The rest was fueled by buyout speculation and a rosy analysis of AMD's future chip designs.

So what: In the second quarter, AMD's revenue rose 9% year over year. The microchip designer reported a net loss of $0.05 per share, but analysts were expecting about twice as much red ink. Several analyst firms issued bullish reports based on this report, and share prices rose more than 14% the next day.

That gain took place on a Friday, near the end of July. Come Monday, AMD shares raced another 15% higher. One analyst firm speculated that the company could be the target of a buyout attempt. That angle was supported by a successful launch of the new Polaris graphics chip architecture, which looks capable of keeping AMD competitive in this generation of the graphics wars. 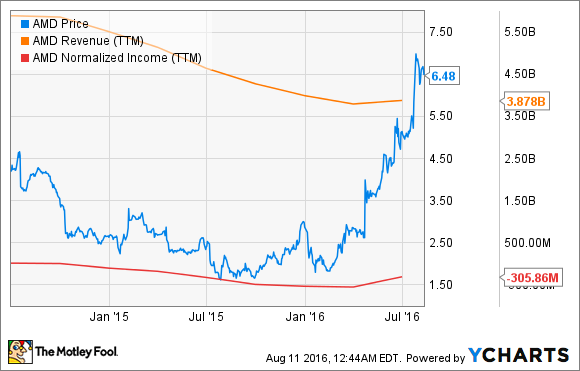 Now what: AMD shares have now more than doubled in 2016 and tripled over the last 52 weeks. The company is not easy to pin down with simple price-to-earnings metrics, since the bottom line remains negative. The chip underdog has sported positive free cash flows over the last four quarters, but that $107.5 million windfall works out to an enterprise value-to-cash flow ratio of a sky-high 61. By contrast, archrivals Intel (NASDAQ:INTC) and NVIDIA (NASDAQ:NVDA) have EV/FCF ratios of 15.2 and 27.9, respectively.

In other words, AMD's valuation is riding high and the company is under tremendous pressure to deliver strong growth and improving profitability if it wants to defend these share prices. The expensive nature of this stock also makes it a less likely takeover target, assuming that the prospective buyers care about paying a fair price.

This stock has been downright exciting to watch in recent quarters, but I'm not convinced that AMD's rally has staying power. I'd suggest watching this one from the sidelines, at least until AMD can prove that it has a clear path to sustainable profits.