The cloud computing specialist shared some fresh partnership details in July, setting the stage for even larger jumps in early August.

What: Shares of Rackspace (RAX) rose 12.3% in July 2016, according to data from S&P Global Market Intelligence. It was not a smooth ride, but still a welcome rebound for current shareholders (like yours truly).

So what: Coming off a 17% plunge in June, Rackspace could have used a strong start to the new month. Instead, the stock took a 5% nosedive on July 5 for no obvious reason.

But things started looking up on July 7, when Rackspace announced a broadened partnership with Microsoft (MSFT -0.40%) and its Windows Azure cloud computing platform. The expanded relationship with the second-largest cloud service allows Rackspace to resell Azure and Microsoft Office 365 bundles through its own partner programs, with Rackspace's trademarked fanatical support on top of Microsoft's proven computing tools. Boosted by this announcement, Rackspace share prices rose 7% over the next two days.

Then, the company said that its fanatical support program for the market-leading Amazon Web Services platform had amassed a support team with 300 professional certifications between them. This was a smaller market mover, but the stock did rise 5% over the next few days.

Rackspace held steady at that elevated level through the end of the month. 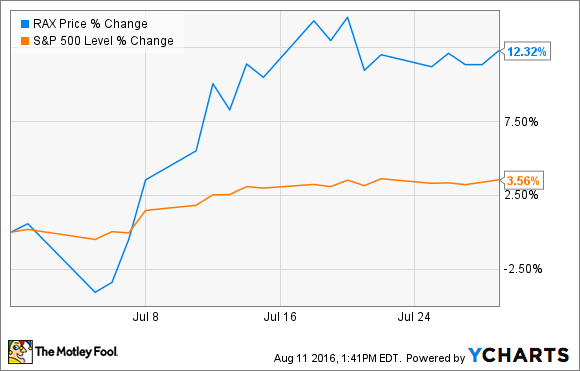 Now what: In early August, the stock's momentum continued with a sudden 25% jump. Rumor had it that Rackspace had found an interested buyer, ready to pay at least $3.5 billion for the whole company.

The report has yet to be fully debunked, though no actual buyer has stepped up to acknowledge a serious bid. Then, a solid second-quarter report held share prices steady at the newfound plateau.

All told, Rackspace shares are now trading a market-beating 19% higher so far in 2016. The stock is also hovering right alongside the S&P 500 benchmark in a 52-week perspective, trading just above breakeven in that scenario. Will the company find a real buyout partner? Can the early rise in August hold steady into September? Stay tuned!