Shares of Rackspace Hosting (NYSE:RAX) gained 34.2% in August 2016, according to data from S&P Global Market Intelligence. The entire surge rested on Rackspace taking a buyout offer, first as a rumor and then as solid news.

The first week of August, the rumor mill started grinding out Rackspace buyout reports. Share prices surged 13% higher on Aug. 4 on the first takeover rumblings, then another 19% the next day as more details became available.

The stock wavered around these levels for the next couple of weeks, and then the other shoe dropped. On Aug. 26, Rackspace formally announced that affiliates of the Apollo Global Management (NYSE:APO) fund family is taking the company private. The deal is worth a total of $4.3 billion in cold, hard cash. Apollo's final bid amounts to a 38% premium over the prices seen before the buyout rumors started percolating.

Oh, Rackspace also reported second-quarter results along the way, but investors shrugged off that report and it had no lasting effect on August's final share price hike. 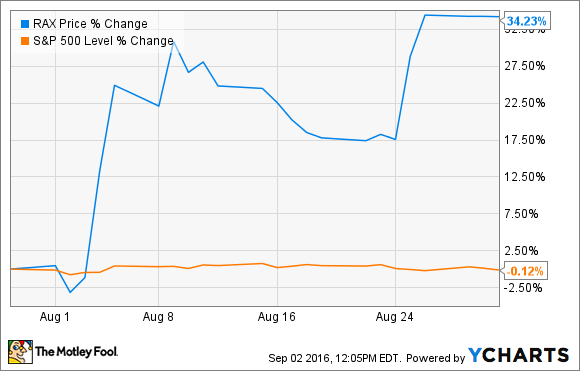 The final price tag is a 113% improvement from Rackspace's 52-week lows, seen just before a solid fourth-quarter report in February. Cutthroat competition in the cloud computing service space drove Rackspace shares lower over the last couple of years, setting the stage for Apollo's low-priced buyout.

As a Rackspace shareholder myself, I appreciate the end of disappointing share price slides. The fact that Rackspace's board of directors negotiated and accepted this deal also shows that the company couldn't come up with a better long-term alternative on its own.

So that's the end of Rackspace as a stand-alone company, unless Apollo spins it back out again in a few years. I'll swallow my losses to the tune of 33% over 3 years, and maybe I'll take a closer look at Rackspace's cloud-computing rivals as a replacement. This exit would have hurt a lot more without the buyout premium at the end.