Investors shrugged off a strong earnings report, as the entertainment technologist's shares were already on the upswing.

What: Shares of Rovi (NASDAQ: ROVI) rose 20.3% in July 2016, according to data from S&P Global Market Intelligence. There was no huge single-day jump along the way, despite the presentation of second-quarter results at the end of the month. Instead, the stock rose in a calm manner with a couple of significant -- but not game-changing -- news items along the way.

So what: The second-quarter report came with positive surprises for both revenue and earnings. Rising sales to entertainment service providers made up for an expected swoon in the consumer electronics division. Again, the Street largely shrugged off this report, perhaps because the underlying business trends had already been priced into Rovi shares at that point.

Earlier, Rovi renewed an important patent license with Verizon Communications. This multiyear deal stretches well into the next decade, and will be used as a starting point for negotiations with other pay-TV providers. Including the Verizon agreement, Rovi now holds valid patent contracts with eight of the top 10 TV service providers in the U.S., and six of these agreements were signed during the last 18 months.

Also, the pending acquisition of digital-video recording veteran TiVo (TIVO) took another step toward completion. The Hart-Scott-Rodino waiting period was ended early, clearing the air of regulatory antitrust reviews. The two companies expect their merger to close in the third quarter of 2016, which is currently underway.

TiVo shares, which are tied directly to Rovi's under a proposed cash-plus-stock deal structure, rose 6.5% in July. 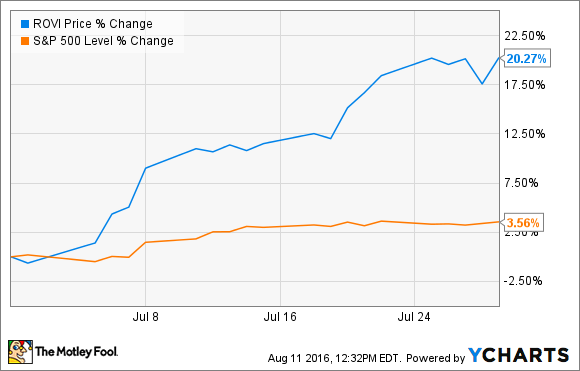 Looking ahead, the TiVo combination looks like a natural fit that will keep both TiVo's and Rovi's operations competitive for years to come. Baking Rovi's TV-schedule technology into TiVo's products and services will boost the value of both partners, and the two companies already share clients across many geographical markets.

As a reminder, Rovi will pay TiVo shareholders $2.75 per share in cash, along with Rovi shares worth $7.95 at the time of closing. The number of shares will be based on the average cost of Rovi shares in the three weeks before the final closing date, so July's rise won't change the final deal size in any way.