Please ensure Javascript is enabled for purposes of website accessibility
Log In Help Join The Motley Fool
Free Article Join Over 1 Million Premium Members And Get More In-Depth Stock Guidance and Research
By Eric Volkman - Updated Apr 26, 2019 at 10:56AM

In which we explore whether this once-popular company's shares have been unfairly punished by Mr. Market.

When a stock dives to new lows, it's always worth asking if there's any value left in it. Has the market overreacted to a bad quarter, a piece of scary news, or a dip in the fundamentals?

We could rightly inquire this of TiVo (TIVO), the onetime master of the digital video recorder (DVR) that has been eclipsed by other technology. The stock is teasing not only its one-year low, but also a bottom not seen since the 1990s. Perhaps, though, it's been seriously oversold and presents a buying opportunity. 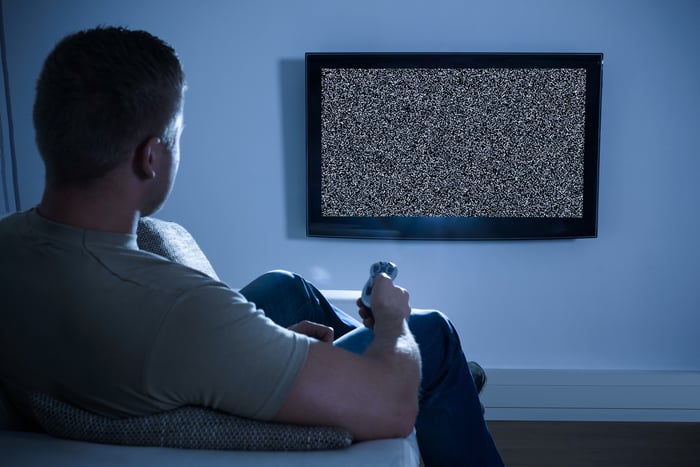 TiVo stubbornly stuck with its DVR technology for years, and it meaningfully expanded its business only when it was bought by Rovi in 2016. Like TiVo, Rovi is an operator of once-cool technology. The company specialized in providing the interactive, onscreen TV program guides many viewers used in the pre-streaming days.

Though this marriage of two complementary businesses was a sensible one, DVR remained TiVo 2.0's anchor technology. Unfortunately, this was quickly being made obsolete by TV/movie streaming services such as Netflix, which were joined by other options including the live-event fan's top pick of the moment, YouTube TV from Alphabet (GOOG -3.69%)(GOOGL -3.93%).

Even when boosted by the inclusion of Rovi's operations, TiVo made that classic mistake of believing too much in its tech. While it dug in, the world moved on to more state-of-the-art, convenient TV-watching options.

These days, TiVo is a company with no place to go. It seems to be holding out hope for a buyout, which is hardly a sign of confidence in its underlying business. More ominously, it's not providing financial estimates for upcoming quarters.

That might be aimed at avoiding embarrassment; in TiVo's most recently reported quarter, the company's nearly $169 million on the top line was down by 21% on a year-over-year basis. TiVo also missed the average analyst estimate of $174 million. The same dynamics were in force with net profit. On a per-share basis, this fell from the year-ago tally of $0.48 to $0.21, well shy of the average $0.28 analyst projection.

So, to me, TiVo's stock price slump and lack of popularity are due mostly to its status as a dinosaur. Not long from now, our younger friends and family will be asking "What's a DVR?" when the tech is mentioned in conversation.

We've moved into a world where Netflix and Alphabet and their ilk form the standard, and most of us utilize one or more of these on-demand streaming entertainment services. Considering that, the idea of "recording" seems quaint and nearly pointless.

Besides, even on the rare occasions when we'd want to record something we're not present for, we have baked-in options.

Some time ago my household began subscribing to YouTube TV. If I want, with a few clicks of the mouse I can get Alphabet to record every show in a particular series (there's no option to record only one or a few) and store it on its cloud.

But this makes watching them later only slightly more convenient -- after all, they're parked in the app and I just have to search for them. I can also "tape" a sporting event I might have missed. Watching a game later robs it of its immediacy and suspense, though. So even when we have DVR-like technology at our disposal, it isn't exactly must-have.

With the former Rovi's data from the program guide technology in its chest of assets, TiVo does hold some value. But a buyout hasn't materialized after more than a year of "strategic review" by the company, so at this point even if TiVo is sold it probably won't be for top dollar.

Time has passed TiVo by, in other words. And I think it's wise to pass on the stock, no matter how temptingly low its price goes.