What: Shares of Alphabet (NASDAQ:GOOG) (NASDAQ:GOOGL) rose more than 11% in July 2016, according to data from S&P Global Market Intelligence. The non-voting Class C stock, under the GOOG ticker, gained 11.1%. The vote-carrying Class A shares, tickered as GOOGL, jumped 12.5% higher. Share prices quietly climbed higher throughout the month, punctuated by a sharp 5% boost as Alphabet reported great second-quarter results at the very tail end of July.

So what: Second-quarter consolidated revenue increased 21% year over year, landing at $21.5 billion. Excluding the negative effects of currency exchange trends, the gain would have been 25%. Adjusted earnings grew 20.5% and stopped at $8.42 per diluted share. Alphabet doesn't do guidance, but for what it's worth, analysts would have settled for earnings of $8.03 per share on sales of roughly $20.8 billion.

The Google segment saw revenues rising 21%, while operating income increased by 25%. The far smaller "other bets" division of Alphabet boosted its sales by 150% but reported negative operating income again. Other bets is a grab-bag of businesses not related to Google's online search and advertising core, such as the Google Fiber internet service provider operation, the Calico life sciences researcher, and the nascent self-driving car project. 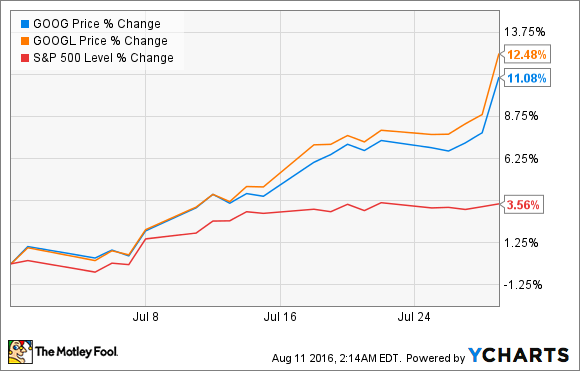 Now what: The post-earning plateau represents record share prices for Alphabet/Google, and the stock can set all-time highs on any given day at the moment. Don't worry too much about the distinction between Class A and Class C shares -- the two stocks generally stick together. They have gained 36% and 33%, respectively, since the separation was executed in the spring of 2014.

Looking ahead, Alphabet remains a solid bet on the general future of technology. The more moonshots and seemingly crazy ideas this company launches, the tighter I'm clinging to my own Class A shares. The search empire fuels Alphabet's operations today, and it will continue to do so for many years to come, but this company's best days will come when web browsers look as quaintly outdated as pagers and VHS tapes do today.

Alphabet is a long-term play that happened to have a fantastic short-term gain last month. The bumpy road ahead will see more of these drastic moves -- both up and down. If you are buying the stock today, make sure to hold on tight for many years, or even decades.