Intel (NASDAQ:INTC) stock has bounced between $28 and $35 this year, but its current price represents nearly flat growth from the beginning of the year. That range-bound trading can likely be attributed to the sluggish PC market, weak demand for its data center chips, and its humbling retreat from the mobile market.

But if we look a year down the road, will these headwinds strengthen or dissipate? Let's discuss analysts' growth forecasts and see where Intel stock might end up in a year.

Investors should take analysts' price targets with a grain of salt, but it's easy to figure out how these targets are calculated with basic math. Analysts, on average, believe that Intel's earnings per share will rise 7% to $2.50 per share for fiscal 2016. They have an average price target of $37.61 on the stock, which would represent a 9% gain from its price at the time of this writing.

If we divide Intel's target price by its estimated EPS, we get an implied P/E ratio of 15. That's lower than Intel's current P/E of 17 and the average P/E of 22 for the broader semiconductor industry. But it's also reasonable to assume that Intel's P/E should pull back, since it's currently at its highest levels of the year. 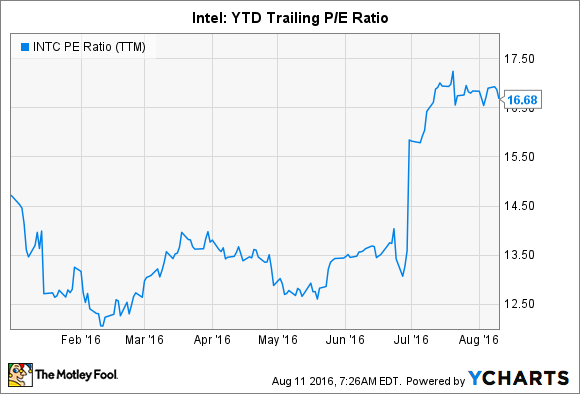 Therefore, it's safe to assume that Intel stock probably won't post big double-digit gains within the next year. However, we should also examine the key challenges that the company will likely face.

Intel could post stronger growth if PC sales start rising again. Unfortunately, IDC expects worldwide PC shipments to fall 7.3% in 2016 and 1.6% in 2017, due to longer-lasting devices, PC owners refusing to upgrade, and the rising use of the smartphone as a main computing device. Microsoft's decision to end free Windows 10 upgrades might persuade some consumers to buy new PCs, but that's a long shot since they weren't willing to install a free OS over the past year.

Demand for Intel's data center chips might accelerate and hit the 15% annual sales growth target it set last November. But that growth relies heavily on the Chinese market, where demand is sluggish and cheaper ARM-based servers are gaining more attention. Nvidia and IBM have also been gaining ground in data centers by pairing Nvidia's GPUs with IBM's Power CPUs for machine learning purposes.

Due to those challenges, revenue at Intel's Client Computing and Data Center groups, which account for over 80% of its top line, respectively fell 3% and rose just 5% annually last quarter. Intel's discontinuation of mobile chips, which were sold through its Client Computing business, is also a double-edged sword -- it can save billions of dollars by eliminating "contra revenue" subsidies, but it also leaves Intel without a meaningful presence (besides modems) in smartphones.

Other potential areas of growth are programmable chips (acquired from Altera) and non-volatile memory. However, those two businesses generated just 7% of Intel's revenue last quarter, and both units suffered operating losses due to the ongoing decline in flash memory prices.

Where will Intel be in a year?

Intel's PC and data center businesses will likely keep posting soft numbers over the following year, and its newer businesses will probably struggle to gain momentum. With those challenges in mind, the consensus forecast for 7% earnings growth with a 12-month price target of $38 sounds fairly reasonable. That target isn't impressive, but Intel's valuations are still fairly low, and it pays a solid dividend yield of 3% -- making it a good defensive income play for choppy markets.

Where Will Intel Stock Be 1 Year from Now? @themotleyfool #stocks $INTC Next Article
Current