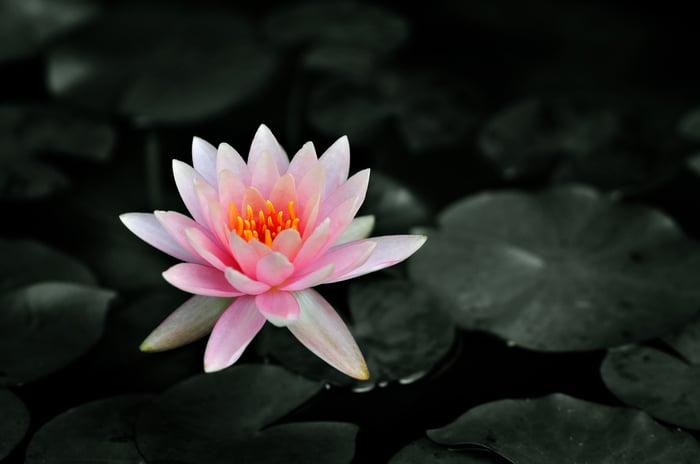 The retail industry is notoriously challenging and competitive, and department stores in particular have been reporting lackluster financial performance over the past several years. However, TJX (NYSE:TJX) is a major exception to the rule in the industry, as the company is producing rock-solid growth in times when most competitors are struggling with falling sales and store closings.

Blossoming in the mud

The lotus flower grows out of the mud and blossoms above the muddy water. In a similar fashion, TJX is rising ahead of the competition in a remarkably difficult environment for department stores. While most industry players are closing stores to reduce costs and protect profitability in the context of declining revenue, TJX is expanding its store base on the back of sustained revenue growth.

Macy's (NYSE:M) has recently announced that it will be closing 100 of its of 728 stores, which according to management's estimates will mean nearly $1 billion in lost annual revenue. The move comes after closing 41 stores last year, as Macy's is still being hurt by declining revenue, both on a total revenue and on same-store sales basis.

Karen Hoguet, chief financial officer at Macy's, said in the most recent earnings conference call that this is not just a company-specific problem. Hoguet believes the whole industry needs to reduce its physical presence, since consumers are increasingly inclined toward online and mobile shopping, to the detriment of brick-and-mortar stores.

Things look even more dismal for decaying department store Sears Holdings (NASDAQ:SHLDQ), which is being hurt not only by industry headwinds but also by the company's own strategic and merchandising mistakes. Sears Holdings has been reducing its store count for years now, and it's still reporting shrinking sales and negative earnings figures. The most recent store-closing announcement from Sears came in April, when the company said it would be closing 68 Kmart and 10 Sears stores during the summer. Unfortunately for investors, these measures haven't been enough to stop the bleeding so far.

TJX is very different story. The company is producing vigorous sales growth and expanding its store base. Total revenue during the quarter ended on April 30, 2016 amounted to $7.5 billion, increasing 10% versus the same quarter in the prior year. Comparable-store sales grew 7% during the period, driven by increasing comparable sales across all of the company's divisions.

This was the 29nth consecutive quarter in which TJX reported growing comparable sales figures, quite a remarkable achievement for a company operating in a cyclical and competitive industry.

While most competitors are reducing their store bases, TJX opened 47 new units last quarter, expanding square footage by 5% and ending the period with 3,661 units globally. Management plans to open 195 new stores in 2016, and the company is not planning to close any of its current locations, indicating that the stores opened in recent years are performing well.

TJX has a smart business model which is relentlessly focused on value. Sourcing is a key source of competitive strength for the business: TJX has a global buying organization with over 1,000 associates located in 11 countries across four continents. This provides access to all kinds of products, styles, and fashion trends from around the world.

The company purchases excess inventory from more than 18,000 vendors in 100 countries, and it capitalizes on its massive scale to negotiate conveniently low prices from suppliers. Needless to say, cost advantage is a crucial success factor for a discount retailer.

TJX has over 3,600 stores in nine countries: The United States, Canada, the United Kingdom, Ireland, Germany, Poland, Austria, the Netherlands, and Australia. In addition, it operates nearly 20 distribution centers in six countries. In combination with its proprietary inventory management system, these assets put together a global supply chain and distribution network specifically designed and refined to support TJX's international off-price business model.

In a nutshell, the company obtains merchandise from a multiple of sources at aggressively low prices. Then it leverages its distribution network to match local demand across a wide range of markets. Customers love bargains, and demand is rock-solid through good and bad economic times.

Moving forward, management believes it has enough room for 5,600 stores when considering only its current markets and brands in the long term. This would mean almost 2,000 new units, or an increase of nearly 50% from the current store base. As long as TJX continues executing well and leveraging on its competitive strengths, this growth plan doesn't seem unreasonable at all.