Iconix Brand Group (NASDAQ:ICON) stock is up over 20% since reporting its latest earnings on Aug. 4. This was the second quarter for the company under the leadership of new CEO John Haugh. What happened during the last quarter, and what is the outlook for the company going forward? 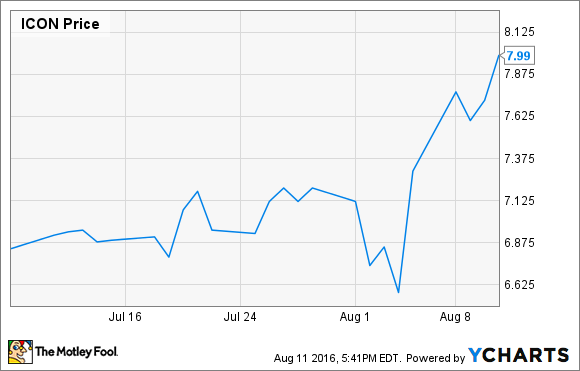 The second quarter in review

Revenue for the quarter was $95.7 million, a 2% year-over-year decline. A substantial portion of the decline was due to lost revenue after last year's sale of the Badgley Mischka fashion brand. Profits for the company declined 16% from last year as the company continues its rebound efforts.

The different segments of the Iconix business came in mixed, as they did in the first quarter. Revenue growth for the women's and home segments were approximately flat to slightly negative; the men's division is was down 16% from last year; and the entertainment division notched a 15% gain.

Iconix relies on retail partners to distribute its brands, and many of those retailers are big-box and department stores. Traditional retail continues to struggle as e-commerce grows and becomes a bigger part of how consumers spend their money. This has created some headwinds for the company's recovery efforts.

Men's clothing is the most notable manifestation of those trends. While the Ecko brand has seen gains with a new campaign with pop singer Prince Royce, clothing brands Rocawear, Ed Hardy, and Starter continue to struggle. Sales of the men's clothing lines come primarily through the retail outlet and are still looking for solid footing, but management expects the tide to turn later in the year.

These losses have been slightly offset with the growing entertainment segment, which comprises the Peanuts and Strawberry Shortcake brands. Peanuts has an especially strong business in Japan, and Iconix recently signed another five-year licensing contract there. Coming off of The Peanuts Movie last year, a new Snoopy museum was opened in Tokyo, and new Peanuts cartoons have launched on Cartoon Network and Boomerang.

Managing and growing revenue from the stable of brands has been a key focus, but cleaning up the balance sheet was the other half of the equation. When the new management team came in early in the year, Iconix was facing the maturity of a large chunk of debt in June. The company took care of that back in April, and since then, it has begun repurchasing notes due in 2018. During the quarter, over $100 million was repurchased at a discount, helping increase the bottom line with savings in interest expense.

The second quarter was a continuation of the Iconix transition story. The negatives and positives mostly offset, but things are starting to look up going forward.

The outlook for the rest of the year

While revenue is still down year over year, it appears to be stabilizing. The company reiterated its guidance for revenue to be between $370 and $390 million for the year, a range of down 2% to up 3% from 2015. Management also upped its outlook for profits and free cash flow for the year. Earnings per share are now expected to be in the range of $0.93 to $1.08 and free cash flow between $169 million and $184 million.

Besides an improving outlook for the business, the debt payoff that began last quarter is expected to extend into the third quarter. Management sees these measures boosting profits going forward.

Management has also begun the sale of equity stakes in a few brands during this last quarter and the next. Most notable was the sale of the Chinese division of the Ed Hardy brand, which increased cash flow by $14 million. Next quarter, the company will record the sale of its interest in Complex Media for a gain of $10 million.

Though the company's cash flow situation has been stressed in recent years, things are starting to recover. The strategic initiatives the company has put in place to shore up the balance sheet will begin to pay off in the near future. 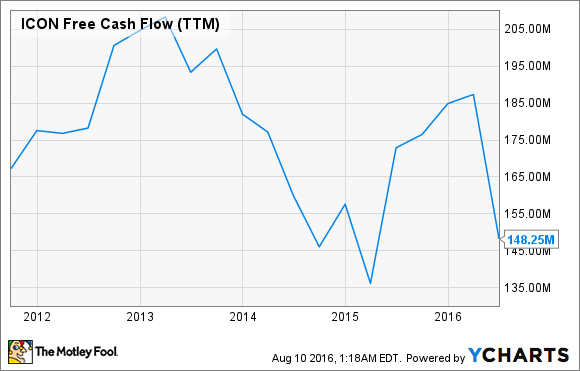 Iconix will be hosting its Investor Day later this year, where it will outline specifics of a new strategy going forward. The new team heading up the company has been working something up for the last six months and has promised to share new revenue ideas utilizing the existing brand portfolio as well as other initiatives.

With the recent upward revisions to this year's profit expectations, the stock may appear cheap with a forward price to earnings ratio of only 6.9 times and a PEG ratio of 0.45. A PEG ratio of less than 1.0 typically indicates a stock is undervalued for its expected long-term growth. However, patience is in order until we know what the company has in mind going forward with its new strategy.

Nevertheless, current owners of Iconix should be encouraged with the positive momentum the company is generating through the first half of 2016. I think it's time to keep an eye on this company if you haven't been doing so already.