The new Wynn Palace resort on the Cotai Strip will be more family oriented and feature fewer gaming attractions, but that doesn't bode well for the region's rebound. Image source: Wynn Palace.

Despite Macau gaming revenues falling for the 26th-straight month, there seems to be a consensus growing that the slump is nearing an end, and better times could be in the cards for the big casino operators in China's gambling oasis. It's possible the run of bad luck is ending, but investors might not want to place any bets if it means the casinos will be posting growth there any time soon.

Macau's Gaming Inspection & Coordination Bureau, the island's casino regulator, reported that revenues in July fell on a year-over-year basis by 4.5%, to 17.8 billion patacas, or about $2.2 billion. Because that was one of the smallest declines recorded in the past two years, and because July's take was 12% above June, many see this as a sign Macau is on the mend. Indeed, analysts are predicting that September will finally be able to report the first increase in gaming revenues on the island since June 2014.

The financial results from individual casino operators seems to point in that direction, too. MGM Resorts (NYSE:MGM) said its Macau revenues fell 19% in the second quarter, better than the 25% decline from a year ago. Melco Crown Entertainment (NASDAQ:MLCO) said revenues rose 17% in the period, but this was almost wholly attributable to the opening of its new Studio City resort last October, as well as its Manila City of Dreams property. Chairman and CEO Lawrence Ho admits, "Macau continues to face challenges in gaming demand," though he agrees it's better than it was.

Although Las Vegas Sands (NYSE:LVS) is still experiencing difficulties, suffering a dramatic drop in revenue at properties like Four Seasons Macau (down 38% in the quarter), Sands Macau (down 23%), and Sands Cotai Central (off 15%), the mass gaming market is where everyone is looking now.

An appealing change of pace

Beijing has a five-year plan to remake the island into something closer to Las Vegas, rather than the VIP gamblers that Macau is known for, with games and entertainment that would have mass appeal. To that end, it:

That's placing hardships on the casino operators. Melco Crown, for example, which was awarded 250 tables at Studio City, has seen the casino stumble in its opening months, generating just $363 million over its first two quarters of operation. Where Melco initially said it wouldn't have any VIP tables at Studio City, it's now putting in three. And Wynn's paltry table-game allotment at the Palace means it's going to have to transfer tables from its existing resort to make it viable, increasing the likelihood it will simply be cannibalizing revenues.

Because Las Vegas Sands is scheduled to open up its own new mass-market-oriented Parisian resort next month, it has to be worried that it, too, will come up short on the number of table games given. Even the opening of MGM's new Cotai resort, which has been delayed once before, has now been pushed back again to the second quarter of 2017. 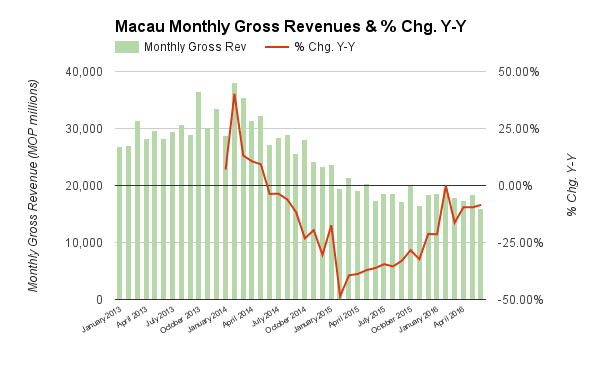 Macau remains in a funk. The slowing decline in gaming revenues isn't exactly a sign of health, but rather just how ill it's been. July's decline may look comparatively better, but July 2015 had seen revenues fall almost 36%, and that had been down from a 6% decline in 2014. Likewise, analysts may be looking for an uptick in September's take, but that comes after two years when revenues plunged 40%. A slight increase now isn't a preparation for a rebound, but symptomatic of Macau simply stabilizing at new lows.

Las Vegas Sands, MGM Resorts, and Wynn Resorts can take some solace that revenues might not drop much further, though a weak Chinese economy could still wreak havoc on their plans for their new resorts. Investors, however, shouldn't be expecting any of them to hit it big on Macau for the foreseeable future.