Stocks took a step back on Friday after setting new all-time highs in the previous trading session. The Dow Jones Industrial Average (DJINDICES:^DJI) and the S&P 500 (SNPINDEX:^GSPC) indexes both ticked down by less than half of a percentage point:

In economic news, retail sales rose at a slower pace in the month of July, according to the latest official data. Automotive stores and online retailers stood out as winners last month while sporting goods sellers, book stores, and department stores suffered minor declines.

NVIDIA's stock popped 6%, putting shareholders at a near-170% return over the past 12 months. Friday's rally was sparked by second-quarter results that showed broad demand strength across NVIDIA's portfolio of graphical processing hardware. Sales rose 24% to $1.4 billion as its core gaming business grew by 18% and categories like data center and automotive spiked by 110% and 68%, respectively. Management credited new tech launches for the sales spike. "Strong demand for our new Pascal-generation GPUs and surging interest in deep learning drove record results," CEO Jen-Hsun Huang said in a press release. 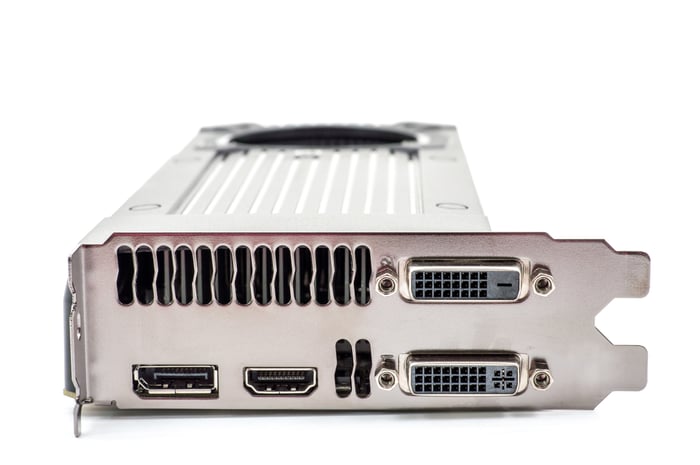 Profitability held steady at 58% of revenue, and operating expenses grew at a much slower pace than sales. Those positive trends combined to push net income up 65% over the prior year period.

The strong demand NVIDIA is seeing suggests that the company could keep up its better-than-20% sales growth pace, assuming its product development releases continue resonating with customers.

NVIDIA's strong position in emerging technologies like artificial intelligence and deep learning, meanwhile, give it an edge against competitors and allow for unusually high profit margins. As for the coming months, management's latest forecast calls for another acceleration of sales growth. Revenue should weigh in at $1.68 billion, which equates to a 28% spike year over year.

Nordstrom gets inventories back in line

High-end department store Nordstrom jumped 8% after releasing second-quarter results that beat consensus expectations. Like peer Macy's (NYSE:M) report did this week, Nordstrom's figures pointed to an imminent return to sales growth: Comparable-store sales fell by 1%, versus a 2% drop in the prior quarter.

After accounting for a shift in the timing of its storewide annual sale, though, comps would have been positive for the quarter. Executives said the surprisingly strong popularity of that sale -- along with strict inventory management -- powered the rebound.

Gross profit margin fell by a percentage point to 34% of sales (Macy's also held steady at 40%), yet management said that difficult cuts over the past few months have put Nordstrom on a much stronger footing now. "Our inventories are well-positioned -- current and in-line with our sales trends," Chief Financial Officer Mike Koppel told investors in a conference call. As a result, the company can now turn back to "offense," as Koppel put it, by focusing on bringing in compelling trends and styles that will ideally keep customer traffic climbing higher.

Nordstrom has plans to cut costs across its operations, including by scaling back the expansion rate of its off-price Rack brand -- yet it isn't currently entertaining the kind of dramatic physical store pullback that Macy's just announced. The company's savings powered a slight upgrade to the retailer's full-year earnings outlook. Executives see Nordstrom earning as much as $2.75 per share in 2016.