The Americans for Tax Fairness has sent a request to the Internal Revenue Service to launch an investigation into whether Gilead Sciences (NASDAQ:GILD) is inappropriately ducking U.S. taxes on sales of its megablockbuster hepatitis C drug, Sovaldi, which is sold both on its own and as part of the combination therapies Harvoni and Epclusa.

The tax advocacy group claims Gilead Sciences' decision to "domicile" Sovaldi in Ireland in 2013 is why Gilead Sciences' tax rate has fallen sharply in spite of a dramatic increase in sales. Sovaldi based drugs now represent more than half of the company's revenue. 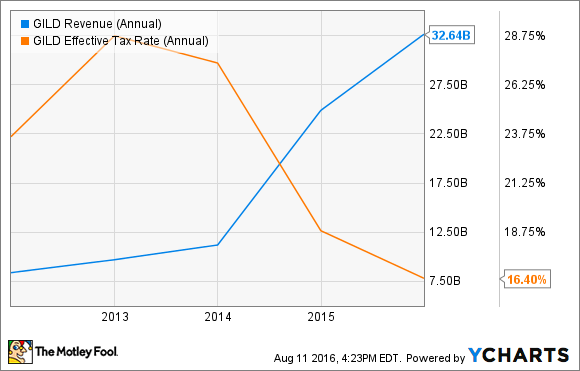 Gilead Sciences has reported to the Securities and Exchange Commission that it would owe $9.7 billion in taxes if it brought the $28.5 billion in profits generated from Sovaldi-based products back into the U.S. from overseas.

Sovaldi was developed by Pharmasset, an American company that was acquired by Gilead Sciences for $11.2 billion in 2012. Although Sovaldi is protected by U.S. patents, the advocates think Sovaldi's profits are being taxed at Ireland's corporate tax rate of 12.5% or less.

Gilead Sciences' pricing decisions have been as controversial as American businesses' decisions to shift profits to low-tax countries, including Ireland.

Sovaldi-based drugs have significantly improved cure rates and treatment duration, but they've done so at a steep cost. Sovaldi hit the market with a $84,000 cost per 12-week treatment cycle, or $1,000 per pill. Since 2 million Americans have hepatitis C, that price blew up third-party payers' budgets, resulting in significant push-back from patients, doctors, and others. New competing hepatitis C drugs have lowered the cost of these treatments in the past year, but Gilead Sciences is still hauling in nearly $4 billion in hepatitis C revenue per quarter.

Gilead Sciences isn't alone in pricing next-generation drugs at previously unseen levels, nor is it alone in its desire to cut its tax bill.

A number of companies are avoiding America's high corporate tax rate by shifting businesses overseas via tax inversions. Tax inversions involve a large company buying a small company that's headquartered in a tax haven so that businesses can claim a foreign country as their home without physically moving there. Tax inversions were reined in by the Treasury Department in April.

The IRS doesn't comment on individual taxpayers, so it's unclear if they'll launch an investigation into Gilead Sciences. However, the IRS is investigating Facebook's overseas taxes, so there is a precedent.

A potential investigation shouldn't be ruled out by investors, but any tax bill that's associated with such an investigation should be kept in perspective. Gilead Sciences boasts one of the best balance sheets in the industry and it's got plenty of cash to pay an unexpected tax bill. As of the end of June, the company was sitting on $24 billion in cash.