No book has had a more profound impact on my investing than Nassim Taleb's Antifragile. It argues that the entire world can be broken into three categories:

We want our portfolios to be as antifragile as possible. But we often fail at this. That's largely because we are suckers for the narrative bias: We tell ourselves a story about a company: how its sales will grow and its products will revolutionize the world, and we invest accordingly.

I created a compelling narrative for the first stock I ever wrote about for The Fool six years ago. Since then, that stock has trailed the market by a whopping 172 percentage points!

By viewing the investing world through an "antifragile" lens, I eliminate the narrative bias by focusing on three attributes:

The most antifragile company I know

When I look around at the business landscape today, no company is more Antifragile than Alphabet (NASDAQ:GOOG)(NASDAQ:GOOGL) -- formerly known as Google. If I had to invest my entire life's savings into one stock, it would be the C shares of Alphabet -- because they are the less expensive of the two classes of shares.

Let's look at the company through an antifragile lens:

Lots of cash and lots of customers

Alphabet has a massive war chest that just keeps growing. When cash and equivalents are added up with marketable securities, Alphabet is sitting on over $73 billion. At the same time, debt remains a pittance in comparison -- just under $2 billion. And the company's free cash flow is impressive and growing. 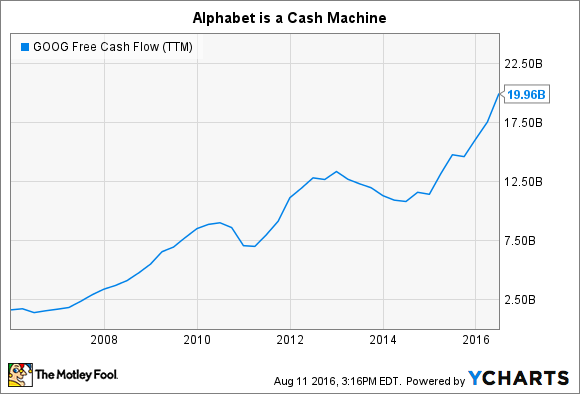 When the company brought CFO Ruth Porat on board from Morgan Stanley in 2015, it was a sign that management was getting serious about controlling costs and making good use of its cash. I don't think it would be a stretch to see the company start paying a dividend in the future. But for now, I'm content to know Alphabet is in such outstanding shape.

Millions of businesses worldwide buy advertising exposure through Google, meaning if any one customer decided to leave, it wouldn't have an outsized effect on the company's bottom line.

Management with skin in the game

In 1995, Larry Page was visiting Stanford as a prospective graduate student. A current student -- Sergey Brin -- was assigned to show him around. Two years later, the pair started what become Google. Twenty-one years later, they are still at the helm of the company: Page as CEO, Brin as the leader of Google[x] -- more on Google[x] below.

When the shares of Brin and Page are added together with those of the rest of management, the group owns 95% of Class B shares, worth over $35 billion. Some analysts were angered with the company's multi-tiered ownership structure, unveiled in 2013. In essence, the move made sure that Brin and Page would be the ultimate decision-makers in company matters.

But given the choice between a democratic ownership that runs the risk of an outside force attempting to squeeze short-term profit out of Alphabet, and a benevolent leader calling the shots, I'm going to side with the benevolent founders.

The company's decision to change its name from "Google" to "Alphabet" is classic barbell: Page wanted to codify the difference between the search engine and all of the small "moon-shot" bets the company was making.

The Google division simply mints money. With 89% of the global desktop search market, 95% of the global mobile market, and seven products that have over one billion users, Google has more data on hand than any other entity the world has ever known. That data allows the company to offer targeted ads the likes of which can only be matched by Facebook (NASDAQ: FB) -- another very anti-fragile company. Given the market share and ecosystems that Google has created -- especially with the Android operating system and Chrome browser -- it would be very difficult to challenge Google on search.

But Page isn't content to rest on those laurels. That's why the company's Google[x] labs focuses on creating technologies that solve some of humanity's biggest issues. Self-driving cars, connected homes (Nest), Google Fiber, life-sciences ventures (Verily), and even an attempt at greatly extending human life spans (Calico) are just a few examples of what Alphabet is trying to do.

In the end, it would only take one of these ventures succeeding to make a significant contribution to Alphabet's bottom line. Over time, I'm hopeful that this will come to pass.

But I'm not actually doing this

Of course, it would be (small f) foolish to actually put all of my money into one stock. Even so, shares of Alphabet make up over 12% of my real-life holdings. The rest, of course, is spread out among many other companies. The beautiful thing about the antifragile framework is that it allows me to place those bets among other companies that share the same three traits above. I suggest considering this unconventional approach in your own investing life.

If I Could Buy Only 1 Stock, This Would Be It @themotleyfool #stocks $GOOGL $GOOG Next Article
Current