What: Crude oil rallied sharply this week on news that OPEC was reconsidering talks to freeze production. That news drove crude up about 6% to around $44 per barrel, which was a three-week high. While that rally provided lots of fuel for oil stocks, it was not the only catalyst driving this week's biggest movers. Those stocks, according to data from S&P Global Market Intelligence, included Resolute Energy (NYSE: REN), Emerge Energy Services (NYSE: EMES), Sanchez Energy (NYSE: SN), Natural Resource Partners (NYSE:NRP), and Cobalt International Energy (NYSE: CIE): 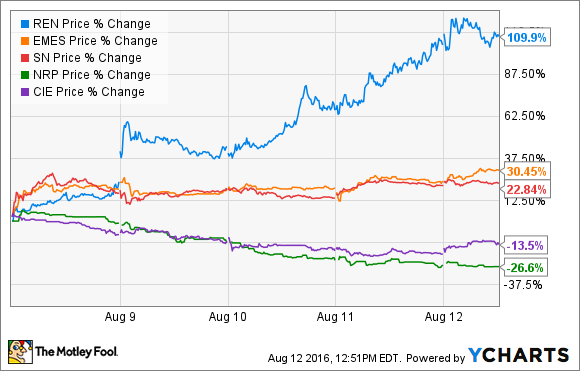 So what: Shares of Permian Basin-focused driller Resolute Energy skyrocketed after it reported second-quarter results. Production in the Permian soared 90% from just last quarter after the company brought several big wells online. Because of those strong well results, the company boosted its full-year production outlook by 13%. Furthermore, after closing the sale of its Reeves County midstream assets, Resolute Energy was able to pay back all of the outstanding borrowings under its revolving credit facility.

Earnings fueled frack sand producer Emerge Energy Services' strong gains this week. While the company reported a net loss of $22.9 million, or $0.59 per unit, due to the challenging frack sand market, it did take several steps to shore up its balance sheet. Topping the list was the previously disclosed $178.5 million deal to sell its fuel business. However, Emerge Energy Services also completed a $20 million private placement equity offering to bolster its balance sheet and liquidity.

Gulf Coast-focused producer Sanchez Energy also reported pleasing second-quarter results. Total production was up 4% year over year, enabling the company to exceed the high end of its average daily production guidance by 7%. In addition, the company plans to boost its capital expenditures budget by $50 million, which positions it to deliver 5% to 8% production growth in 2017.

Unfortunately, Natural Resource Partners and Cobalt International Energy were not part of this week's oil- and earnings-fueled rally. Instead, both slumped double digits due to the continued fallout from their concerning earnings reports the prior week. In Natural Resource Partners' case, investors remain gravely concerned by the fact that its cash provided by operating activity is down nearly 50% over the past year, which is putting pressure on its balance sheet. Meanwhile, Cobalt International Energy's investors are apprehensive since its $1.8 billion Angolan asset sale fell through, renewing fears about its ability to finance future offshore developments.

Now what: For some energy investors, this past week brought a sigh of relief. Not only did oil rebound, but several companies reported stronger-than-expected second-quarter results, suggesting that better days lie ahead. That said, for investors in companies with steep balance-sheet challenges, the worries remain, because conditions need to improve substantially before these companies are back on solid ground.