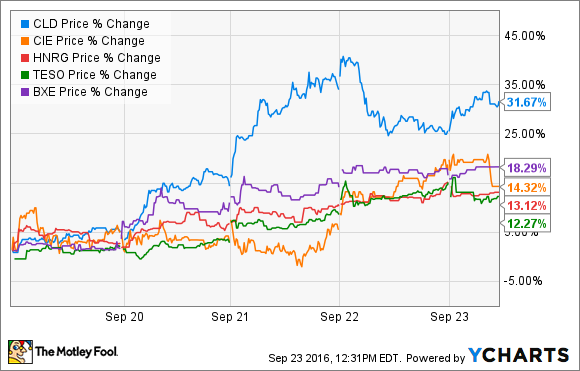 Cobalt International Energy, meanwhile, jumped not only due to rising oil prices, but it continued to ride last week's wave after reaching an agreement with drilling contractor Rowan Companies (NYSE:RDC) to terminate a lease one year early. Doing so will save the company $80 million through 2018, which is critical for the cash-strapped company. That said, Cobalt International Energy did agree to use Rowan as its exclusive drilling contractor for the next five years, which could end up costing it more money in the long run.

Canadian oil and gas producer Bellatrix Energy, on the other hand, not only rallied thanks to the OPEC-inspired oil price rally, but due to an asset sale. The company announced on Monday that it sold its non-core Pembina assets for $47 million in cash. Bellatrix Energy plans to use the cash proceeds to repay debt.

Finally, the move higher by oil-field service company Tesco's stock was primarily driven by OPEC. That is because higher oil prices are a critical factor to drive a market recovery, which would improve demand for Tesco's tubular services and products. As such, investors are betting that OPEC will intervene this week, which would help restart Tesco's earnings growth.

The problem with these rhetoric-driven moves is that it is entirely possible neither comes to fruition. Trump might not get elected and even if he does he might not make coal great again. Likewise, OPEC might not move, and even if it does it still might not stabilize the oil market. That is why investors are better off steering clear of stocks that are moving based on hope instead of tangible improvements in market fundamentals.