The Bakken shale's rise to prominence in the oil industry is nothing short of remarkable. While the first oil discovery dates back to 1951, the oil was trapped within the tight shale rocks, which posed a real technical challenge to the industry. Because of that, it was not until the early 2000s when the combination of horizontal drilling and hydraulic fracturing made the Bakken technically and economically viable for production. In fact, those extraction techniques, combined with triple-digit oil prices, unleashed an oil boom in North Dakota.

The Bakken shale is one of several oil-bearing rock formations within the greater Williston Basin, which spans about 200,000 square miles covering parts of North Dakota, Montana, and Canada:

While geoscientists long speculated about how much oil resided in the region, it was not until the oil boom kicked into high gear that investors started taking these resource estimates seriously. That was especially true after the U.S. Geological Survey released its updated assessment in 2008, estimating that between 3 billion and 4.3 billion barrels of oil were recoverable using technology that was available at that time. That said, as producers continued to drill and refine their techniques, it led the USGS to ratchet up its ultimate recovery to 7.4 billion barrels of oil in 2014. Meanwhile, others estimate that as much as 24 billion barrels of oil could eventually be recovered, which for perspective would completely satisfy American oil consumption for more than three years at the current consumption rate. 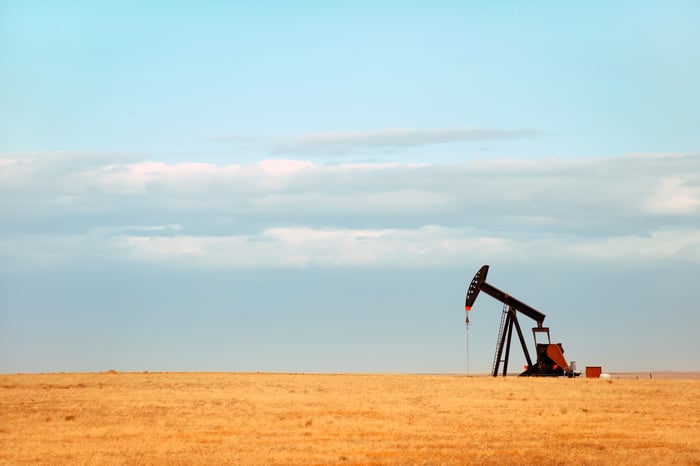 While oil has been trickling out of the Bakken since the early 1950s, it did not become a large-scale producer until 2007. However, production ramped up dramatically since then, rising from less than 100,000 barrels per day in 2007 to more than 1 million barrels per day by 2014. That remarkable growth was largely fueled by the play's five most dominant players:

In 2004, Continental Resources (NYSE:CLR) completed the first commercially successful well drilled both horizontally and using hydraulic fracturing in North Dakota's Bakken. It was also the first to drill a horizontal well into the neighboring Three Forks formation. Because it was a first mover in the play, it is no surprise to see that Continental Resources is the leading producer nor that it has the dominate acreage position. While low oil prices in recent years forced the company to slam the breaks on production growth, the company has an enormous resource base to fuel growth when prices improve.

Whiting Petroleum (NYSE:WLL) ascended to the positon as a top producer in the Bakken in late 2014 after paying $6 billion to acquire rival Kodiak Oil & Gas. However, the significant drop in oil prices since that time forced Whiting Petroleum to cut investment spending, which caused its production to decline. That said, instead of investing capital to grow production during the downturn, Whiting is focusing its development dollars on improving well productivity. The initial results have been remarkable, with the company's most recent wells experiencing a triple-digit improvement in initial production rates versus legacy wells.

Hess (NYSE:HES) not only has a leading acreage position in the Bakken, but the bulk of it is located right in the core of the play. Because of that, Hess believes that it will be able to recover 1.6 billion barrels of oil equivalent from the Bakken in the years to come. Furthermore, thanks to its lean manufacturing approach, Hess has some of the lowest drilling costs in the play. That combination a position in the oil saturated core and an industry-leading cost structure enable Hess to earn some of the highest returns in the play at current commodity prices.

ExxonMobil (NYSE:XOM) acquired its initial position in the oil-rich Bakken when it purchased XTO Energy in 2009. It then boosted its stake by 50% in 2012 via another acquisition. However, while the company was quick to acquire acreage, it has taken a much more methodical approach to development by taking the time to study the play before investing the capital necessary to unlock the 900 million barrels of oil equivalent that lie underneath its acreage. Those development plans mostly remain on hold due to the oil market downturn. However, given its vast capital resources, ExxonMobil could quickly ascend to the top of the heap in the Bakken once prices improve.

Like most Bakken producers, EOG Resources (NYSE:EOG) has moderated its drilling plans amid the downturn in the oil market. This year, the company only expects to complete roughly 35 wells combined in the Bakken and its other Rockies oil plays, compared to 48 last year. But since the company has approximately 2,100 future drilling locations remaining in the Rockies, it can potentially produce more than 1 billion barrels of oil equivalent. Needless to say, when oil prices improve EOG Resources will likely devote more cash to pull this oil out of the ground.

The Bakken shale contains an enormous amount of recoverable oil. At the moment, however, producers are letting most of the oil stay in the ground because prices are just too low.  When prices improve in the future, though, this play could once again boom with activity, likely led by these five dominant producers.