Outside temperatures will start to drop as we approach fall, as will the frequency of dividend raises. We're getting out of earnings season, and as always, things are going to cool down. 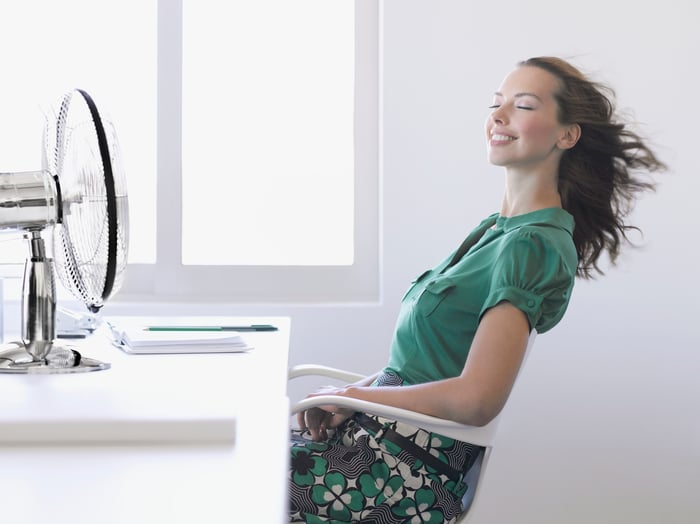 There's still a little heat left before the transition, though. Recent days have brought a fresh round of dividend raises, including several from companies that have been lifting their distributions for a great many years. Read on to see my three current picks.

Paying a decent dividend is obviously important for Kraft Heinz (NASDAQ:KHC). Since launching its payout last summer, the recently merged company has already raised it twice. Increase No. 2 was recently declared: a 9% lift to $0.60 per share.

So far, Kraft Heinz has benefited from opportunistic cost cuts that have goosed the bottom line. In both of its fiscal 2016 quarters, it has shown notable improvement in profitability; Q2, for example, saw the company net a per-share adjusted profit of $0.85, a nearly 40% year-over-year increase.

But expense slicing can only go so far, and Kraft Heinz's revenue development is a concern. In both of this year's quarters, that line item has seen a drop on a pro forma basis. In Q2, it fell 5% to $6.8 billion. 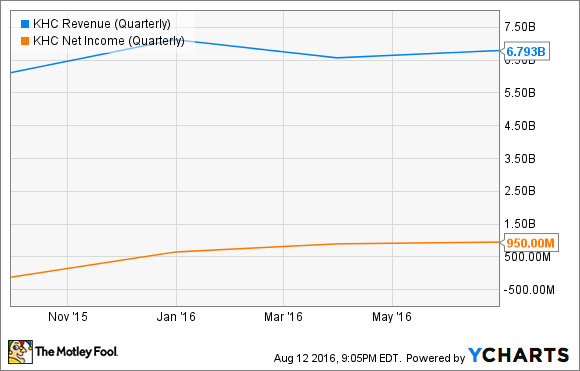 Meanwhile, looking at the 2015 annual cash flow statement reveals that the company spent more than its free cash flow on dividend payments. I don't like to see that dynamic this early on, so for me, Kraft Heinz is a wait-and-see until we can better judge the sustainability of the new payout.

Kraft Heinz's upcoming dividend will be handed out on Oct. 7 to stockholders of record as of Aug. 26. At the current stock price, the payout would yield 2.7%, comparing favorably to the 2.1% average of dividend-paying stocks on the S&P 500.

Sturdy and sprawling industrial goods manufacturer Illinois Tool Works (NYSE:ITW) has hiked its quarterly payout by an impressive 18% to $0.65. The raise was hardly surprising -- the company is a dividend aristocrat, one of the rare birds that has hiked its distribution at least once annually for a minimum of 25 years running.

A raft of divestments over the past few years has left a leaner, meaner company with excellent potential to grow its bottom line. In the most recently reported quarter, it posted quarterly records for operating margin and income, plus after-tax return on invested capital.

In terms of headline figures, Illinois Tool Works' net income rose by 9% against the year-ago result to land at $525 million, although revenue slipped 3% to $3.4 billion. Both tallies, however, beat the average analyst estimates, and the company raised its guidance for full-year profitability.

Thanks (or not) to those divestments, the company's financials have been choppy as of late, and this applies to its cash flow. Yet its recent spend on dividend payouts is well under its free cash flow figure. 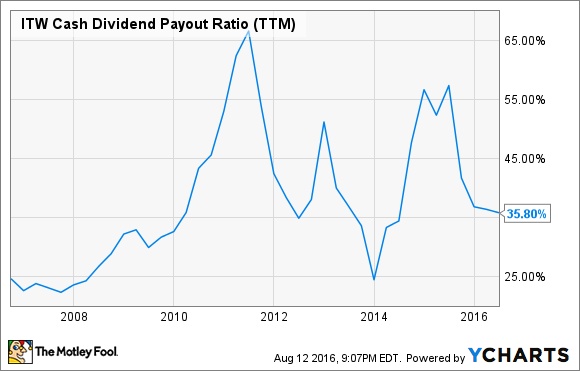 Also, as a dividend aristocrat, the company has a tradition to uphold. The combination of those two factors makes me think we'll continue to see higher distributions from this habitual raiser.

Illinois Tool Works' new payout is to be dispensed on Oct. 6 to investors of record as of Sept. 30. It would yield 2.2% at the present share price.

The annual raise of the quarterly dividend paid by Dover (NYSE:DOV) is approaching death-and-taxes inevitability. Extending a streak to a hard-to-believe 61st year, the company hiked its distribution by 5% to $0.44 per share. 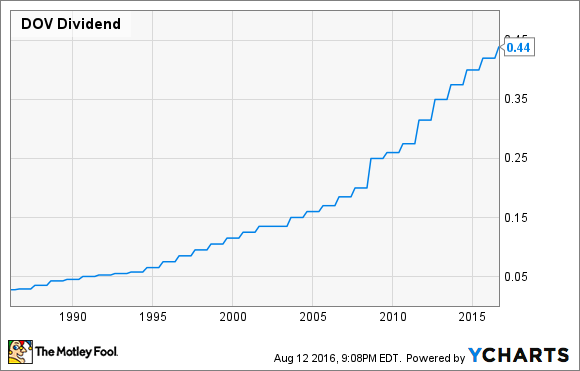 Like Illinois Tool Works, Dover is a sprawling industrial manufacturer active in several different segments. Unfortunately, one of its divisions is energy, which, thanks to stubbornly low oil prices, is struggling at the moment.

All told, Dover operates in just four segments, so weakness in one affects overall performance. Both revenue and net profit have slipped on a year-over-year basis in the two fiscal 2016 quarters reported so far. Q2 revenue declined 4% to $1.7 billion, while adjusted earnings cratered by 23% to just under $120 million.

However, I don't believe this puts the dividend at risk. Dover is still profitable on the bottom line, and it's cash flow positive. It's diverse enough to survive the weakness of its oil and gas sector clientele. Plus, its spending on the distribution is well below its free cash flow figure, thus easily affordable.

Dover's newly enhanced dividend will be paid on Sept. 15 to shareholders of record as of Aug. 31. It would yield 2.4%.