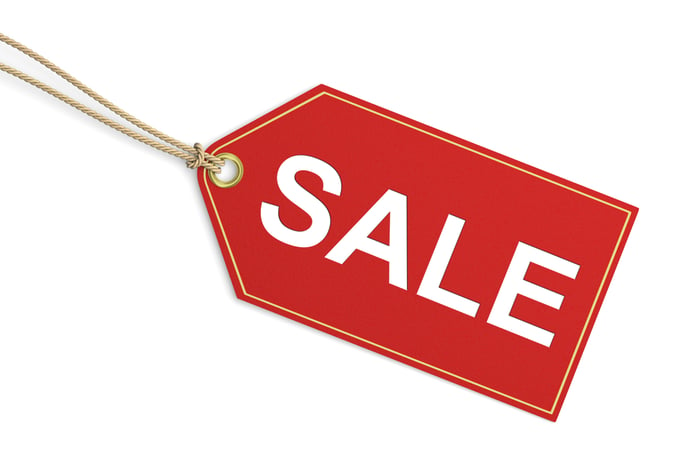 Wearable technology, like fitness trackers and smartwatches, is a quickly growing tech segment. By 2020, nearly 213 million wearable devices will be shipped worldwide, and its market size is expected to reach nearly $29 billion this year.

All of this growth is causing most technology companies to build out their wearable tech business segments, including InvenSense (NYSE:INVN), Skyworks Solutions (NASDAQ:SWKS), and Apple (NASDAQ:AAPL).

While these companies have different approaches to the wearable market, all of them have one thing in common: Their price-to-earnings ratios (P/E) are well below the industry average. That makes their stock shares cheaper, relative to their peers -- but it doesn't necessarily mean they're a good buy.

Let's take a look at each of the companies listed above and whether their cheap price is worth a look from investors.

Apple is trading at just below 13 times its earnings right now, far below the tech sector average of about 25. The company isn't a wearable tech pure play, of course (not many companies are), but it does have a dominant smartwatch position and its stock price still has plenty of room to grow.

Despite Apple's drop in smartwatch sales in the most recent quarter, the company is still the No. 1 smartwatch vendor by far. Apple shipped 1.6 million smartwatches in Q2 2016 and Samsung, the No. 2 vendor, shipped just 600,000, according to IDC.

Tractica predicts the Apple Watch will remain the dominant smartwatch until at least 2020. And Apple is doing everything it can to make sure that happens. KGI Securities analyst Ming-chi Kuo thinks Apple will debut not just one but two new updated Apple Watches this year.

Those devices, along with an expected price cut, will likely help Apple retain its lead in the market it essentially created.

Technically speaking, InvenSense's P/E ratio is currently negative. That means that the company's earnings are negative (i.e., it's losing money) and therefore doesn't have a positive P/E ratio.

InvenSense makes motion sensors for mobile devices, but it's started focusing more on Internet of Things solutions recently, like sensors for wrist-worn wearable devices and GPS for smartwatches and fitness trackers.

The company is a prime example of an unwise investment, despite its stock price being technically cheap and the fact that it's making products in a market with lots of potential.

InvenSense's problems stem from its history of making motion sensors for Apple's and Samsung's smartphones. The company allows both tech giants to put too much pricing pressure on its sensors, which drove down the average selling price (ASP) of its products and, by association, its margins and profits.

On top of that, Apple and Samsung have made up the vast majority of InvenSense's revenues. Samsung's percentage has dropped recently, but Apple's business accounted for 40% of InvenSense's total revenue in fiscal 2016.

InvenSense says the ASP of some of its wearable technology is three to four times the price of its mobile sensors. That's a good thing as the company moves forward in the space, but InvenSense is still far too reliant on Apple, and that probably won't change any time soon.

InvenSense is pivoting to more to the Internet of Things (which includes wearables), but investors are getting burned waiting for the company to diversify its revenue sources.

Skyworks Solutions has a similar dilemma

Skyworks makes analog and mixed signal semiconductors for Apple, Samsung, and a long list of other companies. The company's stock currently trades at just over 13 times its earnings, similar to Apple's.

While Skyworks' technology has focused a lot on mobile devices in the past, you can now find its tech, like Bluetooth Low Energy (BLE), in fitness trackers and smartwatches.

Just like InvenSense, Skyworks has relied too much on Samsung and Apple and is in the process of diversifying its customers and revenue streams. But up to 40% has come from Apple as recently as last year. Even with its low P/E, relying too much on Apple for the majority of its revenue leaves Skyworks too vulnerable to be a solid wearable tech play.

Of course, these aren't all the cheap wearable tech plays available, and investors looking for solid Internet of Things stocks certainly have their pick right now. But of the three listed above I'd choose the boring, but extremely stable and profitable, Apple.