Read this before believing the hype about Pokemon Go boosting sales of motion sensors.

Niantic's Pokemon Go topped 100 million installations in less than a month after its launch in early July, hitting that milestone faster than any other mobile game in history. By comparison, it took Rovio's Angry Birds nearly a year to reach 50 million downloads.

Those stunning numbers have prompted many companies to try to ride the coattails of its success. Yelp added PokeStop filters to its search engine, McDonald's turned all its locations in Japan into PokeStops, and many other businesses bought "lure modules" to attract Pokemon and players to their establishments.

While the benefits of herding players between businesses are obvious, the hype also extends to hardware makers. Pacific Crest analyst John Vinh recently upgraded InvenSense (INVN) -- which supplies motion sensors for iPhones and other mobile devices -- to "overweight" with a price target of $9, claiming that users would be unable to play Pokemon Go without the company's motion sensors.

During last quarter's conference call, InvenSense CEO Behrooz Abdi stated that the company "felt that augmented reality was going to come along at some point," and that Pokemon Go represented "a great opportunity" for the supplier. But is InvenSense really a good proxy investment for Pokemon Go? Probably not.

What happened to InvenSense?

In fiscal 2016, 40% of InvenSense's revenue came from Apple (AAPL 2.32%) and 16% came from Samsung. This left it heavily exposed to Apple's ongoing decline in iPhone and iPad sales, as well as the overall saturation and slowdown of the mobile market. That's why InvenSense's revenue fell 43% annually to $60.6 million last quarter, and why it expects sales to drop another 26%-31% during the current quarter.

Many investors thought that Apple would use InvenSense's motion sensors in the Apple Watch last year. But Apple chose sensors from InvenSense's larger rival STMicroelectronics (STM 2.05%) instead -- fueling fears that Apple could do the same in its iPhones and iPads. A key concern is that STMicro is bigger and has its own foundry, which InvenSense lacks. This gives STMicro more scale and tighter control over its supply chain, which could let it sell its motion sensors at lower prices. All those problems caused InvenSense's stock to fall 20% over the past 12 months.

Why investors shouldn't buy the hype

Considering how much headwind InvenSense faces, it would be reckless to buy the stock on the Pokemon hype alone. The glaring hole in Vinh and Abdi's statements about Pokemon Go is that it really isn't the sophisticated augmented reality title early advertisements claimed it to be.

The main components that the game uses are the GPS and compass for location-tracking, and a camera and gyroscope for capturing the Pokemon. These are basic functions found in any modern smartphone. The "AR" feature doesn't really place Pokemon on real surfaces with depth-sensing cameras, as Microsoft (MSFT 1.29%) demonstrated with Minecraft on the HoloLens. Instead, it simply places a digital overlay over the camera for screenshots. 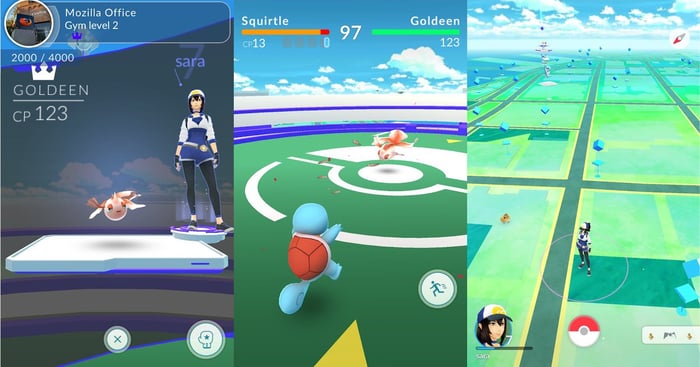 Even if Niantic launched a new version of Pokemon Go which used depth-sensing cameras to place Pokemon on real objects, InvenSense wouldn't benefit because it doesn't make them. Moreover, there's no incentive for Niantic or other developers to create AR games that use that high-end hardware because it would limit their total addressable market.

What the real question is...

Therefore, the real question isn't if the "AR tech" (which is fairly low-tech) behind Pokemon Go will drive sales of Invensense's motion sensors. Instead, it's whether or not the popularity of Pokemon Go and similar AR apps can boost global smartphone sales -- which would increase InvenSense's revenue.

As the smartphone market becomes increasingly commoditized, OEMs will demand lower prices from suppliers. That would help STMicro and hurt InvenSense, which simply doesn't have the scale to stay competitive. Therefore, investors should ignore the noise about Pokemon Go and focus on what really matters -- slowing smartphone sales, competition from STMicro, and InvenSense's ability to diversify into new markets like drones, cars, and other connected devices.

3 Great Income Stocks that Could Double their Dividends