2016 has been a tough year for Canadian Solar (NASDAQ:CSIQ) and solar stocks in general. One of the largest solar manufacturers in the world has lost more than half of its value as potentially falling demand over the next two years starts to worry investors. But here are the company's best moves of the year so far. 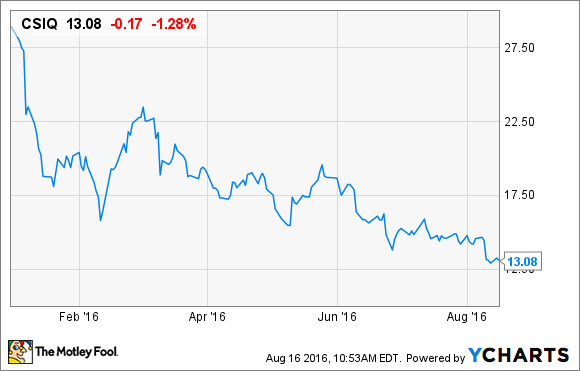 In the last three years, Canadian Solar has gotten a windfall of profits from developing projects in Canada, where it was one of the few qualified bidders for solar projects. And now it's taking what it learned in Canada and the Recurrent Energy team acquired last year international.

Most notable was a win in Mexico's energy auction for a 63 MW solar power plant that will earn $0.04795 per kWh. This was a competitive bidding process and Canadian Solar was a winner, grabbing a piece for the growing Latin American solar industry.

The company also got financing for 21.2 MW of projects in Japan recently. These deals outside the U.S. and Canada where Canadian Solar has been reliant on demand for its solar projects. Building a wider audience will be a good move long-term.

Laying the foundation for the future

If there's one thing that's allowed Canadian Solar to outlast Chinese manufacturing rivals like Suntech Power and Yingli Green Energy, it's the company's balance sheet. Yes, there are $1.3 billion in short-term borrowings, $961.2 million in accounts and notes payable, and $818.5 million of long-term borrowings. But there's also $977.2 million of cash and 437.5 MW of plants in operation on the balance sheet.

That's not a bulletproof balance sheet, but it's better than those of a lot of competitors who had billions in short-term debt and little ability to move beyond making solar wafers or modules. Building a decent balance sheet at Canadian Solar wasn't done this year alone, but keeping that foundation has been key this year. Especially when you consider the uncertainty ahead.

Solar panel prices are already starting to fall in 2016, which will pressure margins in the second half of the year, and project development in the U.S. is expected to slow to a halt in 2017. Those headwinds will require a company to have a strong balance sheet and business to fall back on.

Canadian Solar has made the right moves building a bridge over those challenges until a more stable industry emerges in 2018 and beyond. For investors' sake, hopefully it's enough to get the company to that point.