A leading bank analyst, Rafferty Capital Markets' Dick Bove, thinks banks should stop buying back so much stock. This goes against the prevailing belief that buybacks bolster shareholder value. Is Bove right, and specifically in the case of Bank of America (NYSE:BAC)?

At the beginning of this month, Bove wrote:

Periodically I check my belief that banks stock prices are not impacted by stock buybacks. In fact, if anything, there is a very weak negative correlation. My explanation is that companies that consistently buyback stock are signaling to investors that they cannot grow. Therefore, their stock prices are unaffected by the buybacks.

Bove makes an important point. Despite investors' infatuation with buybacks, the general rule is that they impair shareholder value. Studies have shown, for instance, that companies that spend their money on things like research and development, acquisitions, and capital expenditures, tend to outperform those that allocate a substantial share of their earnings to buybacks.

The problem is that, just like individual investors, companies have a habit of buying high and selling low. Bank of America serves as a case in point. In the five years before the financial crisis, it repurchased over 750 million shares at an average price of $52 per share, equating to around $40 billion. A few years later, in an effort to raise capital to survive the crisis, it then issued 3.5 billion new shares at an average price of $13.47, for a total of $47.5 billion.

This hasn't been good for Bank of America's shareholder value. The dilution caused when it issued shares in 2009 is the principal reason why the bank's stock price is still down by approximately 70% compared to its pre-crisis high. 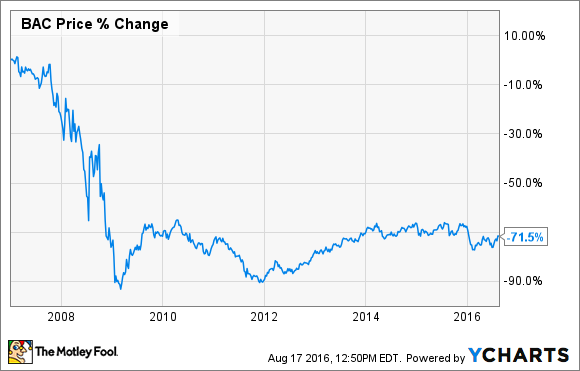 At the same time, it's important to appreciate that well-executed buybacks are one of the most-potent ways for a company to boost shareholder return. This was the point of William Thorndike's excellent book, The Outsiders, which traced the performance of the eight CEOs of publicly traded companies that created the most value for shareholders since World War II. Many of them, Thorndike found, were able to do so through buybacks.

Take Henry Singleton as an example. Over the course of Singleton's 27-year tenure atop the 1960s-era conglomerate Teledyne, the company bought back 90% of its stock, yielding a 42% compound annual return on the buybacks. "No one has ever bought in shares as aggressively," noted Charlie Munger. The net result is that a single dollar invested in Teledyne at the beginning of Singleton's reign grew to $181 by the time he retired less than two decades later.

It's also worth pointing out that banks, particularly big banks, have little choice nowadays but to repurchase stock. As a part of the annual stress tests, known as the comprehensive capital analysis and review, the Federal Reserve exercises veto power over a bank's capital plans. And the Fed has made it clear that it prefers banks to use buybacks as opposed to dividends to return capital, as buybacks can be halted to preserve capital without causing the same degree of concern that accompanies a dividend cut.

If banks didn't buy back stock, in turn, two things would happen. In the first case, because the capital would then just accumulate on a bank's balance sheet, it would weigh on a bank's return on equity, as capital is in the ratio's denominator. This would then incentivize banks to take on more risk in an effort to juice profitability through higher-yielding assets. Consequently, in the case of the nation's biggest banks -- i.e., those that are subject to the Fed's veto over capital actions -- using buybacks is a necessary evil.

This isn't to say that Bank of America's buybacks right now are bad. Quite the opposite is, in fact, is true. If a bank is going to repurchase stock, then it should do so when its stock price, or rather its valuation, is low. More specifically, a bank should buy back stock when its shares trade near or below book value.

This is the situation Bank of America finds itself in right now, with its shares trading for a 40% discount to book value. Even Warren Buffett, who is no fan of using buybacks or dividends to boost Berkshire Hathaway's value, uses them in this way. He's said that Berkshire will repurchase its stock if it trades for less than 1.2 times book value.

In sum, Bove is right that, as a general rule, banks should rely less on buybacks if their objective is to grow long-term shareholder value. But the unique regulatory situation confronting banks combined with the prevailing low valuations of bank stocks, suggest to me that, if there is an appropriate time for banks to buy back stock, it's now.

Should Bank of America Buy Back Stock? @themotleyfool #stocks $BAC Next Article
Current