Wal-Mart and Suncor Energy fell out of favor with the iconic long-term investor during the second quarter.

Warren Buffett's long-term approach to stock picking is the stuff of legend and that means that, when he decides to sell a stock, it rates as must-know news. Fortunately, Buffett's stock sales are reported every quarter to the SEC, and that means that investors don't have to be caught flat-footed owning something that the Oracle of Omaha is unloading.

Warren Buffett's Berkshire Hathaway manages a $132 billion stock portfolio, and because Buffett concentrates his money in a small number of stocks, the number of shares he owns in each company can be staggering. Put simply, it can take a couple of quarters for Buffett to sell out of any one particular investment.

That fact might be worth remembering given that, while Buffett sold more than $1.1 billion in Wal-Mart Stores ( WMT 1.08% ) stock in the second quarter, he still holds 40.2 million shares valued at a stunning $2.95 billion.

While Wal-Mart remains Berkshire Hathaway's eighth-biggest holding, it may not be that big of a position for much longer.

In May, Buffett told CNBC that Wal-Mart is under a lot of pressure to compete with Amazon.com, Inc., and that's got Wal-Mart playing hardball with its suppliers. If Wal-Mart's talking tough with vendors because it feels Amazon nipping at its heels, then Buffett could be worrying that a profit-busting price war is approaching.

The possibility of market share shifting to Amazon from Wal-Mart, or profit falling due to aggressive discounting, isn't reassuring. Thus, Buffett's selling of Wal-Mart may not be done. 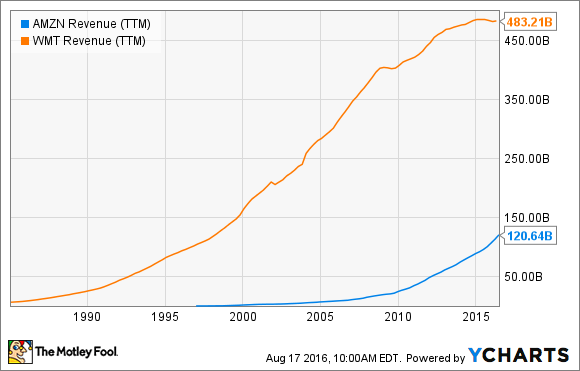 Berkshire Hathaway still owned 22.3 million shares of the oil sands production and refining company heading into July, but it wouldn't shock me if he's still selling and that position gets even smaller this quarter.

Suncor Energy recently reported a second-quarter operating loss of $565 million, and in the first quarter, the company delivered an operating loss of $500 million. The company's second-quarter loss was due to shuttered oil sands production because of forest fires, while the first-quarter loss was due to falling crude oil prices.

Although the second-quarter production shutdown was temporary, it reinforces the quarter-to-quarter risk associated with oil production companies. Couple that production risk with the fact that oil prices could remain dormant for a while, and you get a company that's dealing with a lot of profit uncertainty.

Therefore, while Suncor has refining and retail operations that should lessen the negative impact of oil price drops, this year's losses suggest they're providing insulation that is inadequate. If true, that could be reason enough for Buffett to exit this stock.

People Like to Do Things. Options Investing Can Help

How to Save for Retirement When You Make Less Than $35,000

Investors: Warren Buffett Warns This Asset Class Is a No-No

7 Reasons to Add Dividend Stocks to Your Investment Portfolio