The cancer drug market is already valued at over $100 billion but is still growing at one of the fastest compound annual growth rates in entire the pharmaceutical industry. The underlying reason for this surge in oncology drug sales is the emergence of breakthrough products like Bristol-Myers Squibb's checkpoint inhibitor Opdivo, along with the seemingly never-ending rise in cancer incidence rates across the globe.

That said, the market hasn't exactly been applying rich premiums to the share prices of most cancer therapy stocks of late, perhaps making some of these stocks great bargains for patient investors. Armed with this insight, here is a deeper look at two cancer stocks that are arguably ridiculously cheap based on the long-term prospects of their respective clinical pipelines.

Agenus (NASDAQ:AGEN) is a tiny cancer immunotherapy company that sports an immense pipeline of checkpoint inhibitors and modulators targeting a rich array of receptors with known anti-tumor properties. As a result, the company has been able to attract partnerships with both Incyte Corp. (NASDAQ:INCY) and Merck & Co. (NYSE:MRK) to help advance its anti-cancer checkpoint inhibitor platform.

The Incyte partnership has already led to the launch of a combined phase 1/2 clinical trial for the anti-GITR checkpoint antibody INCAGN1876 in solid tumors, and the two companies are also reportedly close to initiating another early stage trial for an OX40 agonist antibody sometime in the back half of 2016.

The Merck collaboration is reportedly starting to pick up steam as well. Agenus noted in its second-quarter earnings call, for instance, that Merck has now selected a lead product candidate to advance into preclinical studies, triggering a $2 million milestone payment. The underwhelming part, though, is that Merck hasn't revealed much about the details of this collaboration with Agenus, making it difficult to place a long-term value on this joint effort.

Apart from its collaborations with Incyte and Merck, Agenus is apparently also listening to offers to license out its proprietary CTLA-4 antibody that's currently in a phase 1 stage for advanced solid tumors. While the likelihood of yet another partnership is impossible to handicap at this point, the bigger issue to keep in mind is that the company's checkpoint inhibitor platform has definitely caught of the eye of big pharma at this stage, perhaps leading to even more deals or an outright buyout offer down the line.

Buyout or not, this small-cap biotech is on track to produce a treasure trove of clinical updates starting next year, giving investors ample reasons to dig deeper. The key point is that Agenus' market cap of only $525 million at the moment would seem to make it dirt cheap, given that its checkpoint inhibitor platform has the potential to generate billions in revenues in the not-so-distant future.

Don't sleep on this hidden gem

Bellicum Pharmaceuticals (NASDAQ:BLCM) is an up-and-coming player in the hotly contested adoptive cell therapy space. Although Bellicum is trailing the industry leaders Kite Pharma and Juno Therapeutics in the race to bring one of these novel cell therapies to market, the company does sport a potential game changer with its proprietary Chemical Induction of Dimerization (CID) technology that's designed to make adoptive T cell therapies safer and more potent. Kite and Juno, after all, have both run into trouble with their initial product candidates from a safety standpoint, casting doubt on their ability to move into more profitable, earlier lines of treatment. 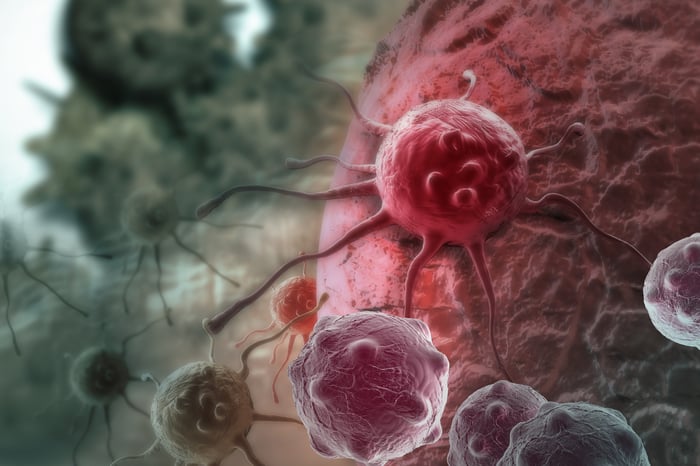 In a promising turn of events, Bellicum recently announced that it may even be able to leapfrog Kite and Juno -- at least in Europe. Specifically, the Houston-based drugmaker said that European authorities are open to considering a regulatory filing for the company's lead product candidate, BPX-501, in pediatric patients with leukemias, lymphomas, and rare inherited blood diseases.

The somewhat unusual part is that an approval would be based on the dual phase 1/2 study known as the BP-004 trial. In short, European regulators are apparently willing to forgo a large, randomized trial if BPX-501 continues to shine in its ongoing study, presumably due to the complete lack of treatments for these rare but deadly blood disorders.

In addition to BPX-501, Bellicum is also close to launching early stage clinical trials for its high-affinity T cell receptor (BPX-701) and GoCAR-T (BPX-601) product candidates. According to the company, BPX-701 will initially target blood-based disorders such as refractory or relapsed acute myeloid leukemia and myelodysplastic syndromes. And BPX-601 is set to enter a phase 1 study as a possible treatment for non-resectable pancreatic cancer.

Although Bellicum's cell-based platform has been progressing at breakneck speed lately, the market apparently hasn't taken notice. Bellicum's market cap of around $508 million, after all, is just a small fraction of the multi-billion dollar valuations of its lead competitors Kite and Juno.

To be fair, Kite and Juno's far higher market caps are partly the result of major partnering deals with bigger biotechs. But that fact doesn't totally explain Bellicum's comparatively meager valuation, especially since the biotech is pursuing a handful of therapies with blockbuster potential, and its CID platform could become the gold standard for adoptive cell therapies in general.

Clinical-stage biotechs are always a high-risk investment. That being said, Agenus and Bellicum are both in the process of building out diverse clinical pipelines aimed at treating several high-value conditions. So, while undoubtedly risky, these two biotechs do offer investors some insurance in the event of a clinical or regulatory setback in the near term. And that's perhaps the main reason that these two stocks might be worth buying ahead of their upcoming catalysts. After all, it's not particularly common for small-cap cancer therapy stocks to sport multiple blockbuster product candidates.