What: Shares of Jones Energy (NYSE: JONE) are down 21% as of 11:00 a.m. EDT today after the company announced that it has acquired land in Oklahoma's STACK/SCOOP oil reservoir and will be issuing stock to pay for the deal.

So what: Like has not been easy for Jones Energy's stock. The company IPO'd toward the end of 2013 just before the oil and gas market started to crash. Suffice it to say, Jones' shares have not been off to a great start since then. 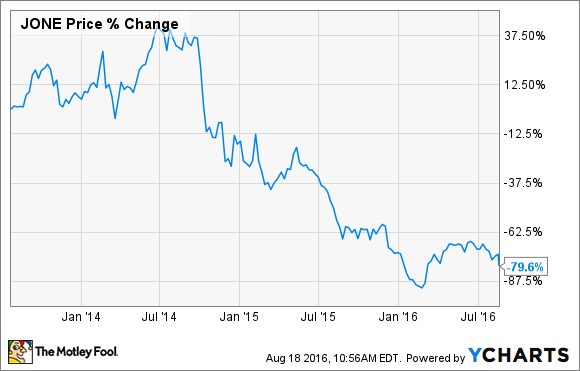 For the most part, companies that have been able to make acquisitions during this downturn have been well received by the market. It's been a sign of balance sheet strength that few have displayed and shows a management team that is willing to look beyond the recent downturn. In this case, it appears that Wall Street thinks it isn't a good time to be trying to raise $135 million through a stock offering when shares have been hit as hard as they have. Part of that has to do with the 14 million in common shares it plans to issue, but also 1 million in convertible preferred shares. It just so happens that those preferred shares are entitled to a dividend of an unspecified amount and don't have specific covenants as to when they can be redeemed for common stock or for how many common shares. Giving preferred stock shares that much of a blank check just sounds dangerous.

Now what: No matter how attractive the acreage that Jones is purchasing may be, you have to question when a company plans to issue preferred stock shares without specifying their payout percentage or their conversion rate. That just adds more unknowns to a small oil and gas producer while we remain in a tough market. It's hard to see anything good out of this news and investors should probably heed the advice of today's decline and stay away.