Crude prices jumped 4.7% Thursday, which was the highest settlement in nearly two weeks. Fueling the surge was government data showing the largest drop in oil inventories in 17 years. It was a truly stunning report, which revealed a 14.5 million barrel drop in crude storage verse expectations for a 425,000-barrel increase. That data was all the fuel oil bulls needed to drive double-digit rallies in Chesapeake Energy (CHKA.Q), Noble Corporation (NEBLQ), Diamond Offshore (DO), Ensco (VAL), and Jones Energy (NYSE: JONE): 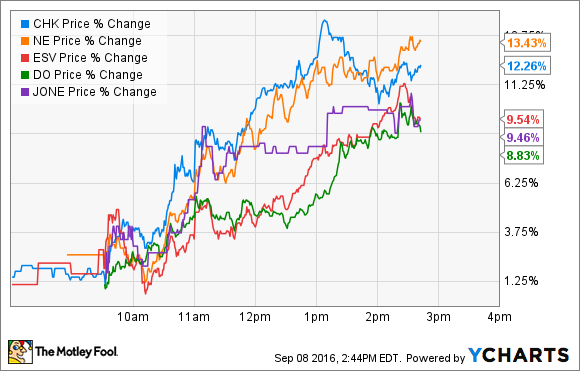 Thursday's report by the U.S. Energy Information Administration (EIA) confirmed Wednesday's report by the American Petroleum Institute (API) that crude stockpiles plunged. In fact, the EIA data showed an even steeper decline than API's 12 million barrel draw. While rising demand and slumping production contributed to this week's inventory draw, Tropical Storm Hermine likely played a role after it caused about 22% of oil production in the Gulf of Mexico to shut down at one point and prevented some crude-carrying ships from unloading. Still, the sheer drop in oil inventories is a very bullish sign that the glut of oil on the market is starting to abate.

That bullish outlook on oil was one of the drivers of Chesapeake Energy's rally Thursday. However, it was not the only catalyst. Adding fuel to its rally was a presentation by the company at an industry conference detailing the progress it is making on its turnaround plan. CFO Nick Dell'Osso pointed out that the company's leverage is down 50% since 2012 and could be down by another $2 billion to $3 billion in the near-term. Further, Chesapeake Energy detailed a target to deliver 5% to 15% annual production growth through 2020 while projecting to be cash flow neutral by 2018.

Meanwhile, Mid-Continent producer Jones Energy seems to be riding the same waves as Chesapeake Energy. It also recently presented at an industry conference touting its improving balance sheet, drilling progress, and upside opportunities. Further, Jones Energy highlighted its recent STACK/SCOOP acquisition, which it believes is a transformation event for the company.

Finally, rising crude prices were the only catalysts driving offshore drillers Diamond Offshore, Ensco, and Noble higher on Thursday. These stocks are moving in the hope that the oil glut is going away, which would imply that producers are one step closer to restarting dormant offshore drilling programs. That said, most producers need oil to be much higher before they start adding offshore rigs, with many in the industry estimating that offshore activity will not start recovering until 2018.

The inventory data was a bit of a shock to the oil market because it suggests that fundamentals are improving much faster than expected. That is unless of course it was skewed by the impact of Hermine. This is why investors need to avoid jumping in or out of oil stocks based on one piece of surprising data because it usually does not tell the whole story.