It should be no surprise that demand for in-flight connectivity is growing. For some of today's uber-connected workers, nothing is worse than having to go hours without the internet. That might lead you to believe the industry's first-mover and largest player -- Gogo (NASDAQ:GOGO) -- would be a great stock to invest in.

But nothing could be further from the truth. 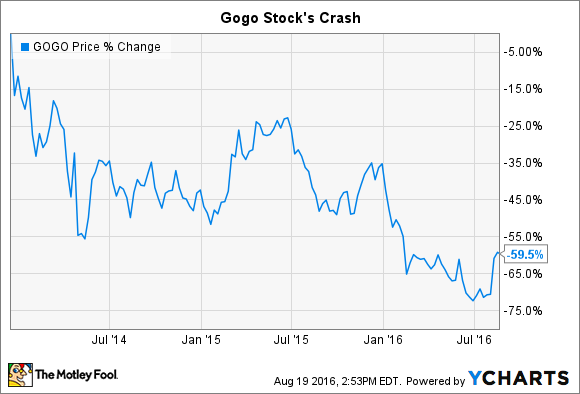 Even though shares have slid over 60% since December 2013, investors are still betting against Gogo in droves. A full 36% of the company's shares outstanding are being sold short. Could those bears be on to something, or are they making a huge mistake?

The crux of the argument: Is there any moat?

The thesis for an investment in Gogo looks like this:

The problem is that over the past year, the wheels have come off of this thesis. The moat, or sustainable competitive advantage, that investors were counting on has completely dried up with the entrance of ViaSat (NASDAQ:VSAT) into the industry.

The first cracks emerged in February when American Airlines Group (NASDAQ:AAL) sued to get out of its contract with Gogo in favor of ViaSat. Although that lawsuit was dropped, it wasn't the last time ViaSat would meddle with Gogo's partnership with American.

In May, Gogo's stock surged when management announced that it had received a major proposal from an airline customer. So confident was management in the deal that it decided to cancel a debt issuance worth over $500 million. But just a week later, CEO Michael Small was wiping egg off of his face: The deal had been with American Airlines, and Gogo would be providing next-gen hardware to some of American's fleet, but American announced that it was ViaSat, not Gogo, that would be providing connectivity to American's new 737 MAX planes.

Why short-sellers have a strong case

The takeaway from this is clear: ViaSat provides a solution that is just as good as Gogo's (at least in the eyes of one major airline). That's bad news for Gogo investors, because it eliminates anything that resembles a moat that Gogo was believed to have.

Clearly, the technology that Gogo provides is being commoditized. When that happens, the company with the most cash is usually the winner. Pricing wars will commence, with each company trying to gain market share while sacrificing margins over the short term. Once competition is driven out, the winner can slowly raise prices and focus on profitability.

There are two variables decidedly working against Gogo. First, ViaSat is vertically integrated: It owns and operates its own satellites, instead of relying on third-parties, as Gogo must do. While Gogo doesn't have to pay nosebleed prices for these services, ViaSat undoubtedly has a cost advantage here.

If we look at each company's financials, it would be easy to assume that Gogo might have the advantage.

ViaSat's profitability over the past 12 months doesn't mean much in the face of such steep FCF losses. But part of that has to do with the company's entrance into in-flight connectivity. Unlike Gogo, it has several other, more profitable divisions.

For instance, in the company's first fiscal 2016 quarter, satellite services brought in $82 million in operating profit, and government systems hauled in $87 million. It was only the commercial networks division -- of which in-flight connectivity is included -- that lost cash, $111 million.

Without this endeavor, ViaSat would likely have a much easier time generating free cash flow. The takeaway is the fact that ViaSat can rely on two other segments to effectively subsidize its in-flight ambitions. That's something Gogo can't rely on.

And that's why, at the end of the day, I think those that are shorting Gogo have a fairly strong case. Though I certainly could be proven wrong, I don't see the coming price wars benefiting Gogo or its shareholders.