Berkshire Hathaway (NYSE:BRK.A) (NYSE:BRK.B) has delivered amazing performance for its investors, with annualized returns of 20.8% per year over the past 51 years with Warren Buffett at the helm. With returns like these, it's only natural to wonder about the risk of investing in the company -- after all, higher reward generally comes from higher risk. Despite its outstanding performance record, you might be surprised at just how risk-averse Berkshire Hathaway's business is.

One business does poorly, another does well

As of this writing, Berkshire has 61 subsidiary companies listed on its website. Just to mention some of the household names, this list includes Geico, BNSF Railroad, Clayton Homes, Duracell, Fruit of the Loom, NetJets, Pampered Chef, and Oriental Trading Company. To put it simply, Berkshire Hathaway isn't too dependent on any one business to be successful.

Don't forget about the stock portfolio

In addition to the subsidiaries, Berkshire has a portfolio of about 45 publicly traded stocks in a variety of industries, worth more than $140 billion as of this writing. Just like Berkshire's wholly owned subsidiaries, some of these stocks do well no matter what, some perform well in bad economies, and others thrive when the economy is strong. And, some of the stocks are compliments to each other, meaning that something that hurts one company would help another.

For example, the persistent low interest rate environment has pushed bank interest margins to record lows, which can hurt the performance of Berkshire's financial stocks like Wells Fargo, American Express, and U.S. Bancorp. On the other hand, low interest rates tend to increase the valuations of high-dividend stocks like Verizon. Businesses like General Motors tend to do well while the economy is strong and people have money to spend. Wal-Mart, on the other hand, actually tends to do better during recessions while people are doing more bargain-hunting.

In short, Berkshire's entire business is designed to perform well during the tough times, while still being able to grow and perform during the good times.

To illustrate this point, consider Berkshire's performance throughout its 50-year history, which is available on the first page (link opens PDF) of Warren Buffett's latest letter to shareholders. While the 20.8% compound annual gain is impressive, it isn't likely to continue over the next 50 years. Berkshire is simply getting too big to sustain such incredible returns. 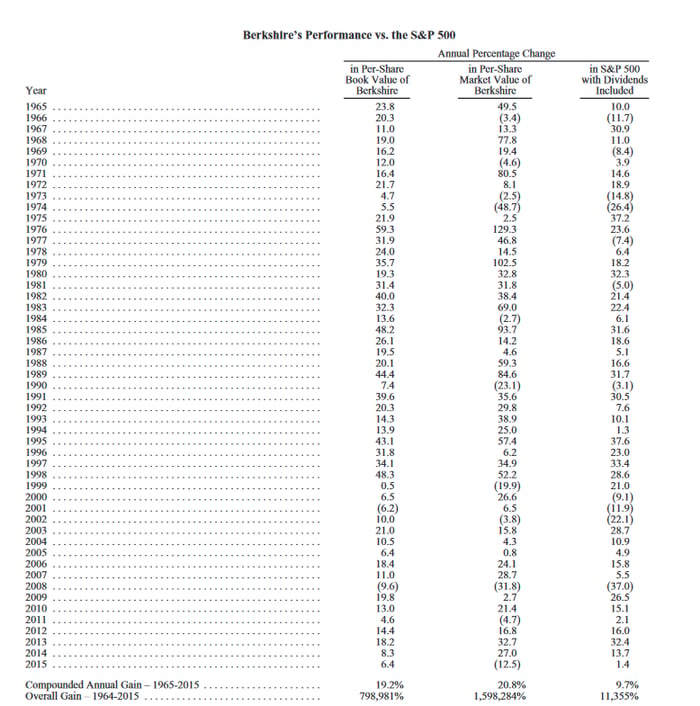 Aside from the overall return (1,598,284%), there are three important things you should notice here. First, notice how Berkshire has a tendency to underperform the S&P 500 in many of the market's best years, such as 2009, 2003, 1999, and 1996, just to name a few. This isn't a universal truth (look at 2013 and 2014), but historically this has been the case more times than not. Warren Buffett openly acknowledges this, as his priority is safe, dependable growth -- not catching the next big thing.

Second, notice that the S&P 500 had 11 negative years out of the past 50. Then take a look at Berkshire's return in all of these years. The company outperformed the market in all but two of them -- a big contributor to Berkshire's long-term success. Here's a thorough discussion of why outperformance during the bad years is the most important factor in the long run.

Finally, take a look at the first column of performance figures, which is the book value change of Berkshire shares throughout the years. In 51 years, the company's book value grew in 49 of them. This is one of Warren Buffett's main goals: increase the company's earning ability every year, and performance will follow.

So, what could go wrong?

No stock is without risk, and Berkshire certainly isn't an exception. Here are just a couple of the reasons Berkshire's share price could go down.

Either of these things could cause Berkshire's stock to plunge in the short term, and there are plenty of other economic and company-specific issues that could hurt Berkshire. It has happened before: Berkshire lost nearly half of its share price in 1974 and more recently took a 32% haircut in 2008. So, if you buy Berkshire, do it for the long term. Thanks to the incredible diversity of Berkshire's revenue stream, any weakness should be temporary. Over time, the momentum should be upward.

The bottom line: How risky is Berkshire Hathaway?

Berkshire Hathaway is a low-risk stock, with the caveat that you intend to hold your shares for the long term (let's say five years or more). Even Warren Buffett himself has advised against buying with a short-term mentality, as the stock has lost half of its value before and likely will again at some point.

Over the long run, however, Berkshire Hathaway has proven its ability to produce market-beating returns. It tends to underperform during the best years for the stock market and outperform during the bad years, with the net effect of excellent returns over time.

No stock is without risk, but Berkshire Hathaway is like buying an entire well-rounded investment portfolio in a single stock, and has the risk-resistance that comes with it.