Brian Feroldi, John Rosevear, and Timothy Green
(TMFTypeoh)
Author Bio
Brian Feroldi has been covering the healthcare and technology industries for The Motley Fool since 2015. Brian's investing strategy is to buy high-quality companies and then let compounding work its magic. See all of his articles here. Follow @brianferoldi
Follow @brianferoldi 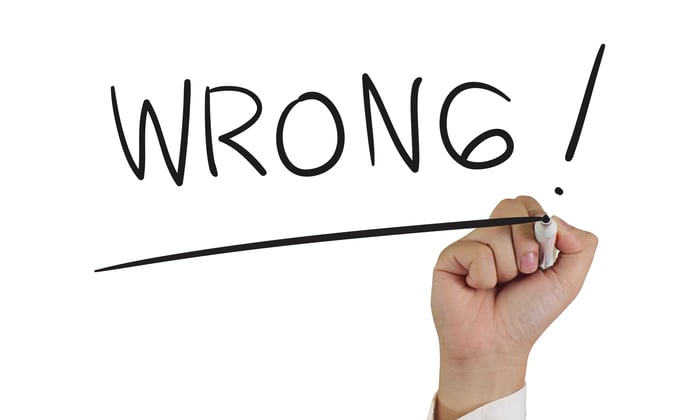 We Fools believe that the stock market is largely rational and prices stocks appropriately the vast majority of the time, but that doesn't mean that it's always correct. Sometimes the markets may be overly bullish or bearish for any number of reasons, and if you can take an alternative stance and be proven correct, then you can be in a position to make a killing.

With that in mind, three Motley Fool contributors are sharing the one stock that they think the market is pricing incorrectly. Read on to see which stocks they picked and why they believe that the market's assessment is wrong.

Brian Feroldi: Short-sellers, or investors who bet against stocks, have placed a target on the back of video game retailer GameStop (NYSE:GME). Currently more than 31% of the company's shares have been sold short, which indicates that many believe that this company's future is looking bleak.

At first glance it's easy to understand why so many have adopted that viewpoint. With the rise of smartphones and digital games, it's not hard to predict that the company's core business is going to be under a lot of pressure into the future.

I thought so, too, but once I started to look under the hood I realized there are plenty of reasons to believe that the market is wrong.

First, let's get the bad news out of the way. Yes, the company's physical game business is expected to continue to decline from here, but at a far slower rate than you might otherwise believe. Management is only forecasting a 6% annualized decline over the next few years.

Before you smirk at that claim, it's worth pointing out that cutting-edge video games require a huge amount of storage capacity. The average PS4 or Xbox One video game takes up 40 gigabytes of storage space, which is a big reason why digital penetration in video games is only about 20% (versus 50% for music).  In addition, physical games can be resold in GameStop's stores, allowing the customer to recoup some cash. You can't do that with digital downloads, so those two factors should help to slow the overall decline.

But GameStop isn't simply sitting still, as it has numerous growth opportunities in place that will help to offset that decline. For one, the company is using the shift to digital games as a catalyst for growth. GameStop currently rings up more than $1 billion in sales for digital games, up a huge 263% from 2010.

GameStop is also pushing into the collectible space by offering game-related apparel, gadgets, toys, and more at its stores. Sales are expected to be $500 million in 2015, and the company has aspirations to reach $1 billion in sales by 2020.

There's also the company's Spring Mobile and Simply Mac concepts, which sell products from AT&T and Apple. Sales from these stores are fast approaching a billion dollars, with more to come in the years ahead.

Add it all up, and management is projecting operating earnings growth of 3% to 5% annually from here. The numbers look even better on the bottom line when you consider the effects of share repurchases, as recent history has shown that the company has had success at taking down its share count. 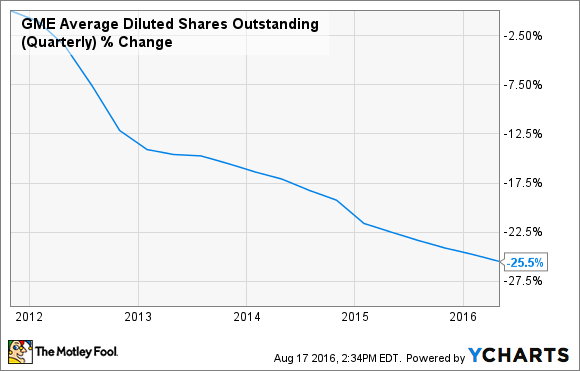 Believe it or not, even analysts agree that this strategy is going to work. The company is projected to grow its EPS by more than 8% over the next five years. With shares trading for only 8 times trailing earnings and offering up a dividend yield of 4.7%, I can't help but think the shorts have bet against the wrong company.

Don't count your chickens before they hatch

Tim Green: Shares of Advanced Micro Devices (NASDAQ:AMD) have surged a mesmerizing 320% over the past year, providing those betting on a turnaround with an incredible gain. The company has already launched the first of its Polaris graphics cards, meant to win back market share from rival NVIDIA (NASDAQ:NVDA), and it plans to release its upcoming Zen CPUs next year. Following years of share losses to Intel (NASDAQ:INTC) in both the PC CPU and server CPU markets, investors are banking on Zen to right the ship.

The first tangible signs of a turnaround surfaced when AMD reported its second-quarter results. The company managed to grow revenue year over year, and while AMD still posted a significant net loss, margins improved. The bull case that has been driving the stock higher over the past year is simple: Polaris and Zen will allow AMD to win back market share from NVIDIA and Intel, heralding in a new era of growth and profitability for the company.

The bear case is also simple, especially following the stock's massive gains over the past year: Both Polaris and Zen will face plenty of competition, and significant market share gains are far from guaranteed. NVIDIA has already launched the GTX 1060, a mainstream competitor to AMD's RX 480, and competitive lower-end cards from NVIDIA are likely later this year. And Intel, which has a near monopoly in the server CPU market, outspends AMD on R&D by a factor of 13. It's certainly not impossible for AMD to stage a triumphant comeback, but I think the market is getting way ahead of itself.

John Rosevear: Here are two charts for your consideration. The first shows General Motors' (NYSE:GM) operating profit margin, excluding special items, in every quarter since the beginning of 2014. (Yes, General Motors. Bear with me here, it's a good story.) 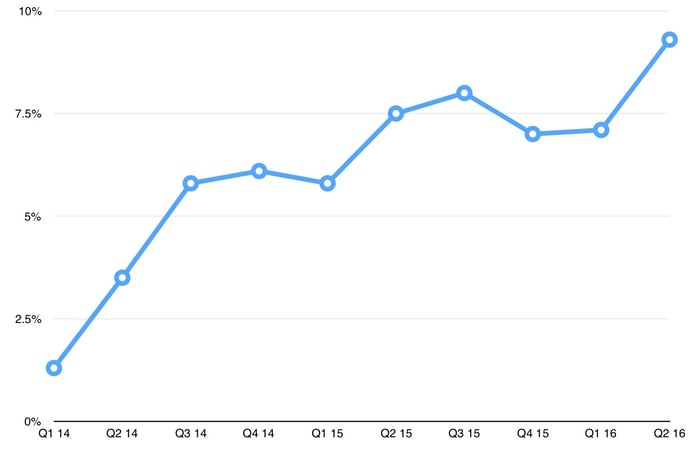 Second, here's how GM's stock price has performed over the same period. 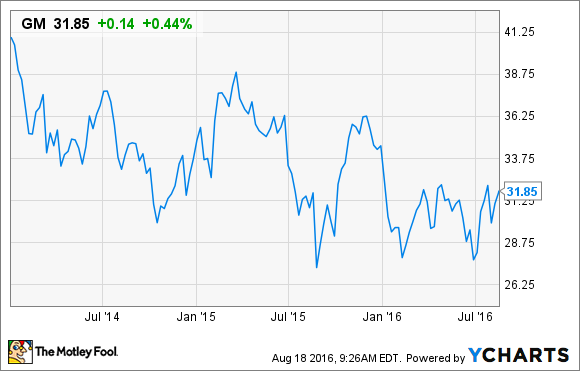 Full disclosure: I did cheat somewhat by choosing a cherry-picked time period. GM's margin in the first half of 2014 were clobbered by the costs of its ignition-switch recall mess, so the slope of the increase looks particularly dramatic. But I only cheated a little: The trend overall has been upward since GM's first post-IPO quarter in 2012, when its margin was around 5.8%.

In fact, last quarter's 9.3% margin was a record. It's not a fluke, either: CEO Mary Barra is driving a series of long-term initiatives (learn more about them here) that are intended to put GM's margin into the 9% to 10% range sustainably by early next decade. There may well turn out to be a sizable increase in revenue (and therefore profits) along the way, too.

It's true that GM was the poster child of the bad old days of Detroit. But that GM is long gone: Over the last few years, GM's quality ratings have skyrocketed, it has emerged as a leader in electric cars and self-driving technology, and it has become much more shareholder-friendly.

What do I mean? Old GM talked about market share and its long-gone glory days as the world's largest-selling automaker, while ignoring the advances made by its rivals. Barra and her team talk about return on invested capital, about returning excess cash to shareholders, about out-disrupting Silicon Valley, and about becoming the world's most profitable automaker.

It's a great story that much of Wall Street seems to be overlooking. The upshot is that right now, GM is dirt cheap: It's trading at just 4 times trailing-12-month earnings, with a dividend yield of almost 4.7%. (Read why that dividend is probably sustainable through a recession.)

Investors are worried about a near-term slowdown in the U.S. new-car market, but GM's longer-term prospects are very bright. For a patient investor, this one's worth a close look.