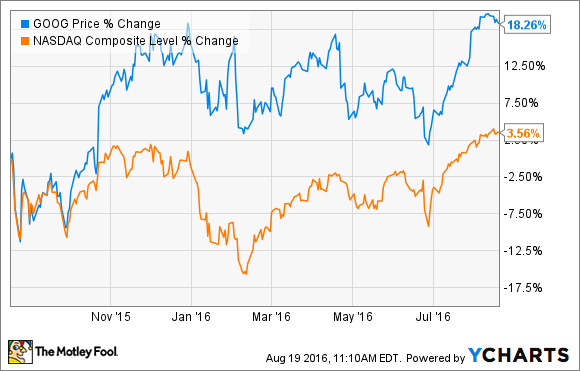 Moreover, Alphabet and/or Google shares have utterly trounced the market since their 2004 IPO, gaining roughly 1,330% compared to about a 200% gain from the Nasdaq.

So how does Alphabet do it? What's the secret sauce behind its astounding financial success? As it turns out, the answer is fairly straightforward.

For those with only a passing familiarity, Alphabet's financial performance relies almost entirely on advertising, which comes exclusively from its Google operating subsidiary. As you can see below, advertising accounted for over 99% of Alphabet's revenue in 2015. Here's the company's revenue composition over the past three years.

This might come as something of a surprise to the casual observer, particularly given the outsized attention that Alphabet receives for its splashy, but currently uneconomical, Other Bets segment.

At least in part due to the media's proclivity toward the new and exciting, Alphabet's futuristic projects garner far more attention than they contribute financially to the company, though many of its projects admittedly carry ample long-term financial potential. However, in the here and now, Alphabet funds itself and its bold bets on the future of technology through plain old advertising, which, as it turns out, still offers investors plenty of future upside.

Alphabet has a market capitalization exceeding a half-trillion dollars, so it may be fair to wonder how much farther online advertising alone can propel the company's stock. Fortunately, it appears quite a bit. According to researcher eMarketer, digital market spending in the U.S. alone is expected to increase from roughly $69 billion this year to over $105 billion by 2020.

In another sign of its increasing dominance, digital advertising will overtake TV advertising, long the gold standard of the marketing world, to become the most utilized advertising channel in the U.S. as soon as next year. With Alphabet holding over 50% market share in this space, expect the company to continue to benefit from this long-term secular growth story. As a result of its position at the epicenter of the digital-marketing industry, Alphabet appears well positioned as one of the first tech companies to eclipse a $1 trillion valuation.

At the same time, though, it bears noting that the company's size likely means that Alphabet isn't necessarily the growth stock it once was. As we've seen with other mega-cap tech stocks like Apple, Microsoft, and Berkshire Hathaway, size can be its own impediment for driving future returns, though these companies' business models crucially differ from Alphabet's, and Alphabet has certainly been proactive in investing for future growth.

Much as it is today, Alphabet figures to remain dependent on advertising well into at least the medium term. However, as discussed above, that should prove more a benefit than a detriment to the company as its overall market continues to expand for years to come.