At its annual developer forum, microprocessor giant Intel (NASDAQ:INTC) talked about its next-generation Atom processor core, code-named Goldmont. Although the Atom family had primarily been interesting to investors because it was at the heart of the company's (failed) mobile applications processor efforts, the cores are still useful in a number of different markets including the Internet of Things, low-end networking processors, and even low-cost personal computers.

To that end, it's important that the company keep making significant performance and power enhancements to its Atom processor cores. Intel's 2013 Atom core, Silvermont, was a significant improvement over its prior-generation Atom core, and allowed the company to build credible offerings in a number of segments.

The company's 2014-2015 Atom core, code-named Airmont, was a very modest improvement over Silvermont. However, it looks as though with this year's Goldmont core, the company is bringing some hefty performance enhancements to the table.

Here is a slide illustrating the performance and power of the prior-generation Airmont core and upcoming Goldmont core in SPECint_base2000 (once an industry-standard test of CPU performance): 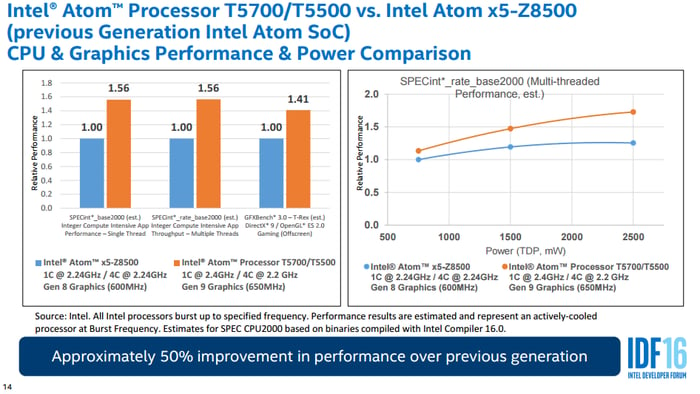 The main problem with Atom processor cores is simply that Intel doesn't release chips in a timely fashion. Products based on the Goldmont CPU core were originally supposed to come out in the 2015 time frame, targeting smartphones, tablets, and low-cost PCs. Intel's Atom-based networking chips have also been neglected, with its current product line still based on the Silvermont architecture manufactured in the company's 22-nanometer process.

Intel should be able to assemble system-on-a-chip products, which integrate CPU cores and other components to make a complete product, in a more rapid fashion. Clearly there is some issue within the company that it needs to remedy.

If Intel can do that, then the company's businesses that rely on the Atom core should be in pretty good shape, particularly if the company continues to make significant generation-over-generation strides in core performance.

However, if the company's product releases continue to be as unpredictable as they have been over the last couple of generations, then it may be difficult for those businesses to achieve the growth and profitability that the company hopes.