Please ensure Javascript is enabled for purposes of website accessibility
Free Article Join Over 1 Million Premium Members And Get More In-Depth Stock Guidance and Research
By Daniel Miller - Aug 20, 2016 at 11:45AM

Nissan is throwing down a pretty aggressive warranty for the 2017 Titan, but it's going to take more than that to dethrone Detroit automakers in the truck segment.

Nissan's 2017 Titan has its work cut out for it in the Detroit-dominated truck segment. Image source: Nissan Motor Co.

Fun fact: The quickest way to get a facepalm out of investors in major automakers such as Nissan Motor Co. ( NSANY 3.17% ) is for the companies to increase incentives and/or deals. Rising incentives are akin to the devil in some apocalyptic nightmare, or so you'd think by the way industry-watchers talk.

But in the U.S. market right now, when buyers are brushing past the fuel-efficient passenger cars the Japanese are known for, maybe it's reasonable for Nissan to jack up incentives and make a push with its struggling Titan -- a vehicle that, if sold at higher volumes, could move the needle for the automaker's top and bottom lines.

If you're questioning whether this really is a good time for an automaker to make a push for market share in trucks, or larger vehicles in general, take a look at just how dire the scenario is for passenger-car sales compared to light-duty vehicles. 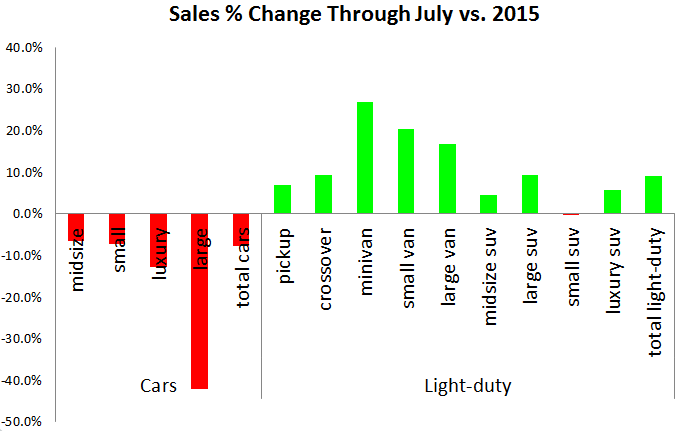 Nissan is planning to offer a five-year/100,000-mile bumper-to-bumper warranty on the 2017 Titan, a change it makes amid its ramp-ups for the launch of two new variants of the struggling large pickup that it hopes will sell at a much faster pace than the model has achieved before.

Now, a five-year/100,000-mile warranty might sound similar to what you generally hear about in car ads over the radio or on television, but there's one little -- or, actually, big -- distinction. Generally, major automakers have only offered that level of coverage on powertrains. A bumper-to-bumper warranty expands that significantly. When Detroit automakers offer bumper-to-bumper warranties on their trucks, they are more likely to be of the three-year/36,000-mile variety. Make no mistake, this is an aggressive push by Nissan at a time when vehicle sales in the U.S. appear to be peaking, and if the Titan gains traction with the tactic, it could lead to deteriorating margins in Detroit's most profitable segment.

"This is a breakthrough message for us about why [truck shoppers] should consider a Titan," said Phil O'Connor, Nissan's director and chief marketing manager for trucks, according to Automotive News. "This makes a statement about our confidence in the truck."

Sure, an extended bumper-to-bumper warranty might signal Nissan's faith in the quality of the Titan, but this aggressive marketing move won't guarantee that the trucks get parked in more driveways. In fact, the model's U.S. sales haven't even increased a full percentage point this year, and through July, not even 8,000 had been sold here.

By comparison, General Motors sold 54,116 Silverados in the U.S. last month alone, and sales of its sister Sierra truck model jumped 13% year over year to 22,428 in July. Ford Motor sold more than 65,000 F-Series pickups last month, and more than 460,000 through July. The Titan isn't even in the same league this year.

When you wind back the clock, its long-term sales history looks just a bit bleak. 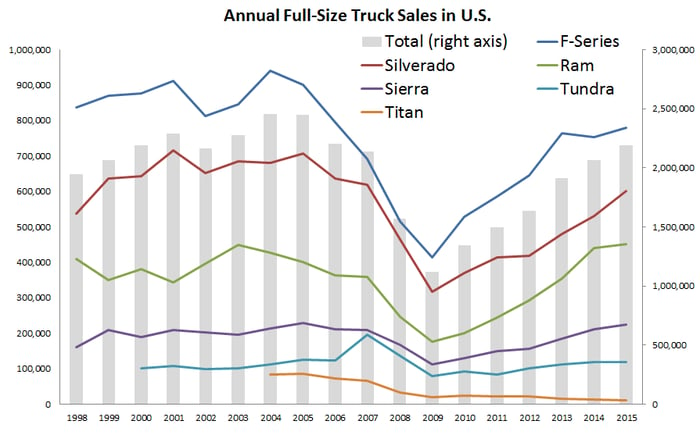 This month, Nissan plans to launch its half-ton version of the Titan, to be followed later this year by the rollout of a less-expensive, single-cab version. Management hopes these two variants will get the automaker's foot in the door of an extremely profitable segment that has historically eluded Nissan in the U.S. market.

Will it work? Only time will tell, obviously, but if history is any indication, it will take one incredible salesman to convince Americans to trade in their Detroit-made pickups. Truck buyers are notorious for their brand loyalty, and it's going to take more than a bumper-to-bumper warranty to turn the Titan into a real contender. On the other hand, considering the graph above, sales of the Titan have almost nowhere to go but up from here.