Taiwan-based Himax Technologies (NASDAQ:HIMX) delivered strong growth in its second quarter and reported progress on its new technology powering augmented and virtual reality. In addition, the company's outlook for the rest of the year remains strong. Is the stock a buy?

Himax's stock is enough to tie even seasoned investors' guts into knots. Performance over the last few years is full of knee-jerk reactions to both the upside and downside. This year has been no exception, and as of late, shares have been trending higher again with an improving outlook from management. 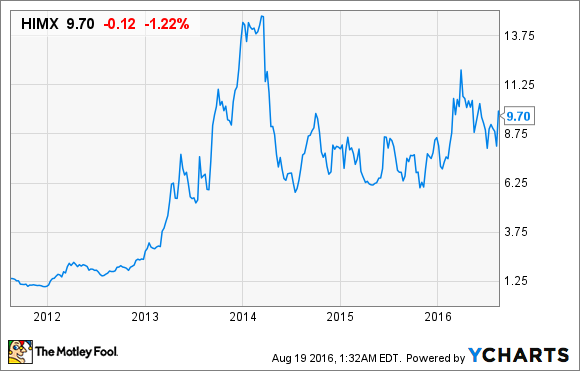 The company struggled last year from a slowdown in the mobile device market, especially in developed markets and China. But demand has begun to pick up again as of late, with orders for the company's small- and mid-sized panel drivers increasing. Leading the way this year have been Chinese smartphone and tablet makers, with tablet growth resuming in China after several quarters in a row of decline.

With mobile technology on the rebound, the company noted the biggest contributor to small- and medium-sized panel display driver growth was the automotive industry. Himax expects that trend to continue in the years to come as an increasing number of new cars feature high-resolution displays.

Also contributing to overall growth was the continued increase in popularity of 4K ultra-high-definition televisions. The new generation of incrementally better picture TVs has been in the U.S. for a couple of years now, but sales are just ramping up in other markets. China, again, is noted as being the primary contributor to the year-over-year growth seen in the company's large panel display driver business.

Himax is seeing a nice rebound in its core display driver business, which made up 78.6% of revenue last quarter. The other 21.4% of business revenue, though, is emerging as the new leader of growth for Himax.

While smartphones and tablets were the company's bread and butter in years past, non-display technology is now taking over. The Himax portfolio of non-display driver technology consists of timing and touch display controllers, image sensors, and augmented and virtual reality.

Non-driver revenue increased 34% year over year last quarter, and Himax reports barely being able to keep up with the influx of new orders for the back half of 2016. The company is investing to expand operations so as to accommodate the higher volume. As a result, investors are to expect only single-high-digit sequential growth next quarter, although year-over-year growth is still expected to come in in the double digits.

Himax is especially excited about augmented reality and cited the recent blockbuster success of the Pokemon Go app. The company stated that, despite the mass of downloads and current 20 million active users, the AR software driving the game is still very primitive and only a glimpse of the full potential of AR technology.

Besides gaming, AR is a potential computing platform of the future for consumers and business enterprises. Himax mentioned applications for virtual offices, teleconferencing, and social networking. As an early investor in developing the technology, Himax stands to benefit in the years ahead if augmented and virtual reality continue to gain traction.

Himax is expected to grow at a 22.5% annual rate in each of the next five years. Using that growth rate gives Himax a PEG ratio of 1.05. The PEG ratio measures current valuation relative to future growth, and a PEG of 1.0 is considered fair value. After its most recent run, the stock would appear to be neither cheap nor expensive given its future outlook.

However, that rate of growth could face headwinds as profits were pressured from a slowdown in China last summer. Still, the company has been showing signs of a turnaround and is projecting that to continue through the end of 2016. Paired with the company's positioning to take advantage of augmented and virtual reality, there is room for the stock to continue running higher.

Potential buyers of the stock should be mindful of its historical performance, though. Prone to violent changes in sentiment, Himax shares will often make double-digits moves up and down. If you make a purchase, do so with a supply of Dramamine.