OK, fans of safe and reliable Intuit (NASDAQ:INTU), before you accuse me of luring you in with a sensational headline, I bring to your attention a stock price chart capturing the summer of last year. After enjoying years of steady appreciation, shares plunged nearly 29% in the four trading sessions following the company's fiscal fourth-quarter earnings release on Aug. 20, 2015: 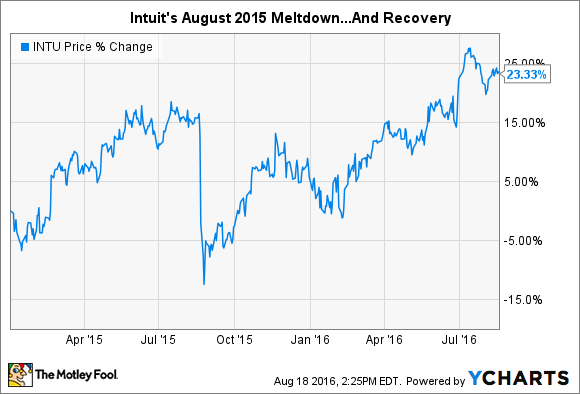 Intuit's free fall was due to a combination of factors, including a miss on its own full-year revenue projections, a revenue forecast for 2015 which disappointed investors, and uncertainty regarding the company's decision to sell three very visible (if no longer financially significant) revenue streams: Quicken, QuickBase, and Demandforce.

As is evident, Intuit's stock battled its way back from this meltdown in the ensuing months. Management has provided some support by spending $2.3 billion to repurchase nearly 8% of Intuit's outstanding shares during the first three quarters of the current fiscal year. And more importantly, the company has enjoyed a solid year so far, culminating in $1.0 billion in net profit earned in the third quarter -- a testament to a strong tax season in which TurboTax Online unit volume expanded by 15%.

Intuit reports on its fourth quarter and full fiscal 2016 year on Tuesday after the markets close, and hopes to avoid last year's stock rout. Investors should evaluate results against management's guidance, which was updated in May. The most important projections are:

Shareholders shouldn't have to guess much on that last bullet point. Intuit issued a press release on Aug. 8 which proudly announced that QBO has reached the 1.5 million subscriber milestone. We can infer that this likely happened before the quarter's end on July 31.

Investors should keep an eye on the number of new subscribers Intuit reports for its QuickBooks Self-Employed service, which was introduced in January 2015. This product, part of the QuickBooks Online ecosystem, is aimed squarely at entrepreneurs and workers in the "gig economy," and is attracting both new customers to the company as well as existing QBO subscribers.

Quickbooks Self-Employed grew at a sequential rate of 50% from the second to the third quarter of 2016, to 75,000 total subscribers. It's the latest example of Intuit's ability to create new services within its cloud-based small business accounting umbrella, and thus provides a useful measure of the overall growth potential of the company.

Finally, the fourth-quarter report will offer us an important data point on Intuit's structural health. After a transition year in 2015, in which the company changed an accounting method to more accurately reflect ongoing subscriber revenue, took impairment charges, and divested products, 2016 has seemed more characteristic, highlighted by solid accounting software growth and a lucrative tax season. So, it will be illuminating to peer at Intuit's operating income margin this week.

In the near future, the company aims to return to the 30%-plus annual operating margin it enjoyed during the four years leading up to 2015. Last year, Intuit's operating margin declined to 17.6%. If management's projections pan out, we'll see a 2016 operating margin of roughly 25% on Tuesday. This will bring the company to within five percentage points of its former peak profitability. Such a finish will put memories of meltdown further behind, and reinforce the perception that Intuit has located its lost momentum.