U.S. railroad stocks are attractive to dividend investors because they have strong business moats and prospects tied to the economy -- and betting on U.S. growth has been a good idea in recent decades. After all, it's an investment that Warren Buffett made when he bout Burlington Northern Santa Fe. That said, choosing the best publicly traded railroad stocks still involves analyzing their dividend prospects and valuations. 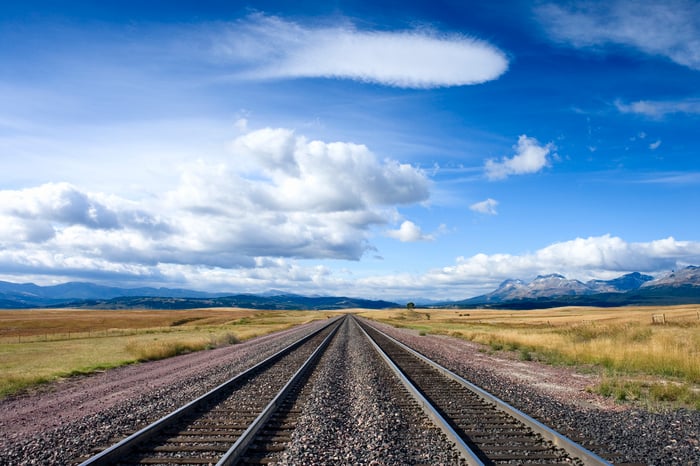 Running a railroad is a capital-intensive business. In other words, it tends to require a relatively high amount of capital expenditure (as a share of net income) to keep a railroad running. This tends to eat into free cash flow (FCF), and if a company wants to pay a dividend -- without resorting to using existing cash or issuing debt -- then it will need FCF. The average FCF/net income figure for five publicly traded railroad companies -- Union Pacific Corporation (NYSE:UNP), CSX Corp. (NASDAQ:CSX), Norfolk Southern Corporation (NYSE:NSC), Kansas City Southern (NYSE:KSU) and Canadian Pacific Railway Limited (NYSE:CP) -- is significantly lower than bellwethers in other industries. 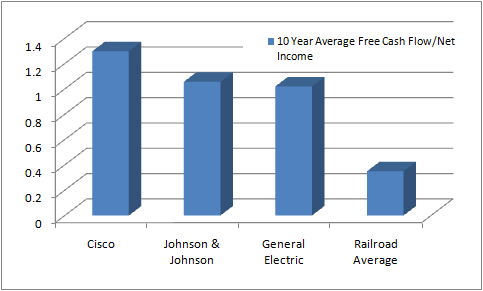 Ultimately, this means investors should focus on FCF rather than income (that is, earnings per share) when looking at railroad companies.

Each railroad has different characteristics that affect its ability to convert net income into FCF. Net income will fluctuate in response to end market conditions and competition from other forms of transportation. For example, the declines in fortunes of the coal, agriculture, and energy industries -- traditionally large sources of revenue for railroads -- have left investors scrambling to find out which railroads have relative exposure to what industry.

With these considerations in mind, let's look at a few important metrics to help decide which railroad stocks are the best to buy. The following table shows dividend yield, and, more important, how much of the company's FCF the dividend is using up -- the lower the number, the better. Norfolk Southern Corporation's trailing FCF isn't covering its current dividend payments. Meanwhile, Canadian Pacific has the most potential to increase its dividend.

The third column shows the 10-year average return on equity (ROE), which is just net income divided by shareholders' equity -- a higher number is better. Simply put, a company's ability to grow FCF and dividends will largely depend on its generation of a good ROE.

An ideal stock has a low dividend/FCF ratio and a high ROE.

Alongside FCF generation and dividend, it's a good idea to keep an eye on liquidity considerations. One way is by looking at the current ratio, which is simply current assets dividend by current liabilities. It's usually a good sign when a company's current ratio is positive and trending upward -- a sure sign of a well-managed company.

Union Pacific Corporation and CSX Corp. come out on top in this regard, so let's eliminate Canadian Pacific Railway Limited. 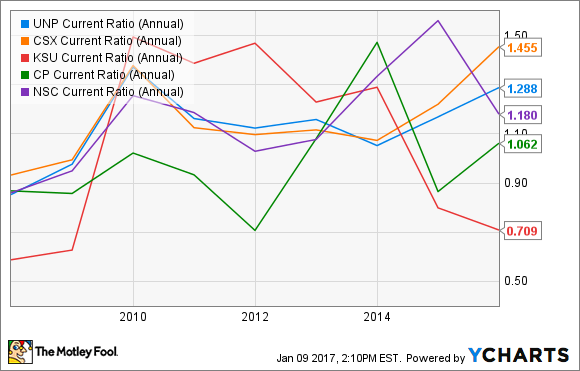 Observant readers will have noted how close the metrics have been so far for CSX and Union Pacific. Whether it's dividend yield, ability to pay a dividend, or ROE, the two companies have similar numbers. That trend continues when you look at the key valuation metric for railroad stocks. As noted, it's important to keep an eye on FCF for railroads, and on a price-to-FCF basis, the two leading candidates are well matched. 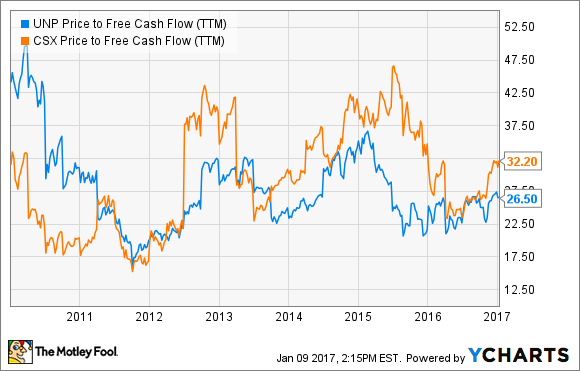 Which railroad stock to buy?

For the record, I don't think either stock is a compelling value, because as a rough rule of thumb I don't like buying stocks that I don't think will be trading on a price-to-FCF valuation of less than 20 in a year's time.

However, if you favor investing in the sector, then there is an argument for buying both stocks -- it always helps to reduce stock-specific risk if you're positive on a sector. If I were forced to make a choice for the best railroad stock in 2016, though, I'd say Union Pacific looks like a better investment. Its return on invested capital (a similar measure to ROE that includes debt considerations) is consistently higher than CSX's. 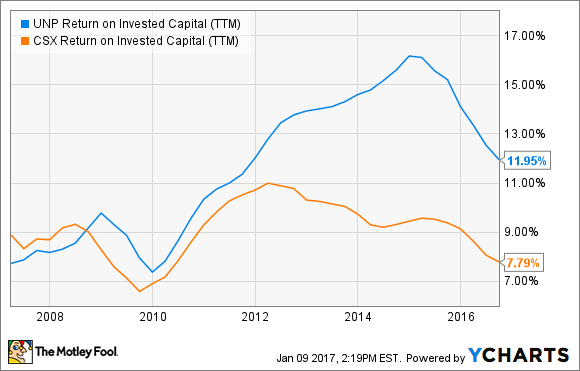 In addition, as a West Coast-focused railroad, it has less exposure to the relatively higher-cost coal-producing regions such as Appalachia. All told, Union Pacific looks like the best stock in the railroad sector.