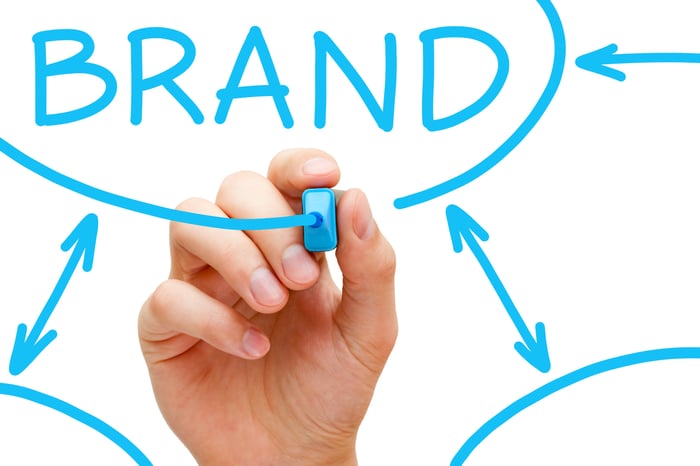 One way that companies can build a competitive advantage for themselves is to create a strong brand. If a company can successfully make its product or service synonymous with quality or value in the categories in which it competes, then it stands a much better chance at building a loyal customer base, which can lead to higher profitability over the long term.

We Fools love to buy companies that have mastered the art of branding, and that's especially true when the company's stock is on sale. With that in mind, here's a list of three companies that have strong brand names and are currently trading at ridiculously cheap valuations.

As a key player in the luxury retail market, Michael Kors (NYSE:CPRI) knows all too well that the fashion industry is fickle. One year you can be the must-have brand, which drives huge growth and sky-high profitability. The next year you could be out, causing consumers to turn their attention elsewhere.

For several years Michael Kors has had a white-hot brand, turning this company into a multibillion operation. However, more recently we've seen signs that Michael Kors' 15 minutes of fame might be coming to an end, changing the company from a growth stock into a turnaround play.

For proof that the company's brand might be losing its luster just look at last quarter's results. Sales only grew by a meager 0.2%, and same-store sales -- which I'd argue is the real metric to watch to gauge brand erosion -- was negative 7.4%. That caused adjusted net income to drop by nearly 11%, which is a huge momentum shift from the 39% earnings growth that the company produced over the past five years.

Of course, Kors has several strategies in place to help turn the ship around. The company is revamping its focus on its men's business, and it's also making a move into the smartwatch and tracker space to help it appeal to a broader audience.

Understandably, investors are concerned that these efforts to reignite interest in the brand will fall on deaf ears, and they have priced Michael Kors stock accordingly. Shares can be purchased for around 10 times next year's earnings, which is an exceedingly cheap price for this well-known brand name. However, it's quite hard to get back in fashion after you start to stumble, so this might be a cheap big brand stock that is worth avoiding until the company proves that its turnaround plan is working.

Unfortunately, recent results hint that the company's brand name has been losing its luster as Harley has reported a handful of quarters of falling sales. The reason for the decline can be traced directly to Polaris Industries and its Indian Motorcycle brand name, which has been gobbling up market share for quite some time now.

To help reverse the trend, Harley has been pouring money into marketing efforts, growing this expense category by a huge 65% in the first quarter. The company is aiming a variety of new programs at first responders and the military in an effort to get a new generation of potential riding enthusiasts to warm up to the company's brand.

Understandably, the markets haven't been thrilled with the combination of lower revenue and higher spending, which is why shares have fallen out of favor. This iconic American company's stock is currently trading for less than 13 times next year's earnings, even though Wall Street is still projecting that earnings per share (EPS) will grow by nearly 10% annually over the next few years. If that forecast proves to be accurate, then right now might be a good time to consider picking up a few shares.

Rounding out our list today is Whirlpool (NYSE:WHR), the home appliance giant. This company owns more than a dozen big name brands that you are likely quite familiar with, including KitchenAid, Maytag, Amana, and, of course, Whirlpool.

Many of the company's brands have been around for decades and have developed a loyal following. In fact, Whirlpool now boasts seven different brands that rack up more than $1 billion in annual revenue, but the company isn't sitting still. Whirlpool is pushing hard to update its brands to target different swaths of consumers. As an example, the company recently reintroduced its KitchenAid brand with the aim of appealing to older homeowners. Having so many different appliance brands at its disposal gives Whirlpool the opportunity to focus on wide swaths of consumer desires.

Even in today's lackluster global economy, Whirlpool continues to post impressive results. Sales growth has been uninspiring, up only 3% last quarter if you adjust for currency movements, but thanks to continued efforts at expanding margins and share repurchases, the company's non-GAAP EPS grew by a whopping 30%. Those results caused management to raise its full-year guidance to $14.25 to $14.75, which gives it a good shot at hitting its 2018 target of $20 to $22 in full-year earnings.

Analysts are believers in Whirlpool's long-term plan and have projected EPS growth of more than 13% annually over the next five years, and yet shares of Whirlpool are trading for less than 11 times next year's earnings. That's a ridiculously cheap price, and when you throw in the company's market-beating dividend yield of 2.2%, this might be a big brand stock for savvy investors to consider buying today.