Stocks stuck around breakeven during Monday's trading session, lurching between slight gains and minor losses throughout the day. By the closing bell, the Dow Jones Industrial Average (DJINDICES:^DJI) and the S&P 500 (SNPINDEX:^GSPC) indexes had each posted tiny declines under light trading volumes.

The energy sector was the market's worst-performing group, as a 3% drop in oil prices dragged commodity-sensitive stocks down. Meanwhile, individual stocks making big moves on Monday included Medivation (NASDAQ:MDVN), which jumped on acquisition news, and Marathon Oil (NYSE:MRO), which fell after the surprise departure of one of its top executives.

Medivation soared 20% higher after the cancer-drug specialist announced that it will be purchased by Pfizer (NYSE:PFE) for $81.50 per share. The deal represents a big win for shareholders of the biotech company -- which is up 2,000% in 5 years -- and for its management team. Executives in late April rejected an offer of $52.50 per share because they felt it "substantially undervalues the company, its leading oncology franchise, and its innovative, late-stage pipeline."

Pfizer agreed with that assessment and has committed to pay a much higher premium -- $14 billion in total -- for Medivation's assets. In addition to the Xtandi hormone therapy treatment that's racked up over $2 billion in annual sales, the pharmaceutical giant is eager to take ownership of related drugs in the pipeline. There are three phase 3 Xtandi studies currently testing results in prostate cancer treatment and one phase 2 study on the potential of reversing advanced breast cancer.

Pfizer said the deal will immediately boost earnings while adding new growth potential in its oncology division. "This transaction is another example of how we are effectively deploying our capital to generate attractive returns and create shareholder value," CEO Ian Read said in a press release. Medivation's executives highlighted the hefty cash boost for investors, saying the transaction "will deliver significant and immediate value to our stockholders."

Marathon Oil was the biggest daily loser on the S&P, as the drop in oil prices combined with company-specific news to send shares down by 7%. The company announced that its chief financial officer, J.R. Sult, has quit after holding its top finance spot since September 2013. The company said the break is for personal reasons and is "not related to any disagreement regarding financial disclosures, accounting, or business matters."

Still, Wall Street often gets nervous when a CFO chooses to leave a company -- especially during a period of worsening finances as Marathon is enduring right now. The energy giant is losing money at an annual rate of $2 billion as commodity prices have collapsed. 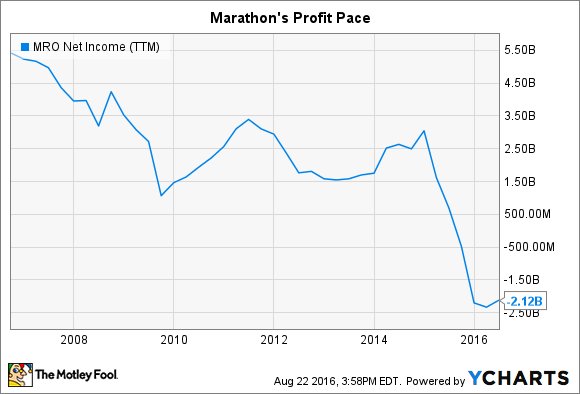 There's no indication that Sult's departure has anything to do with the business, though, and so Monday's drop appears to be just a knee-jerk reaction on the part of some skittish investors. Long-term shareholders will want to watch operating trends and finances, of course, but have no reason to bolt this stock simply because of this management shift.

That said, investors can expect continued volatility given that Marathon is heavily exposed to short-term swings in oil prices. In fact, shares jumped 13% last week alone, leaving Marathon 15% higher since the start of August -- even including Monday's decline.