From their respective all-time highs, 3D printing stocks have taken a beating. 3D Systems (NYSE:DDD) and Stratasys (NASDAQ:SSYS) are down over 80%, while 3D printing service provider Proto Labs (NYSE:PRLB) is down more modestly -- just over 30%: 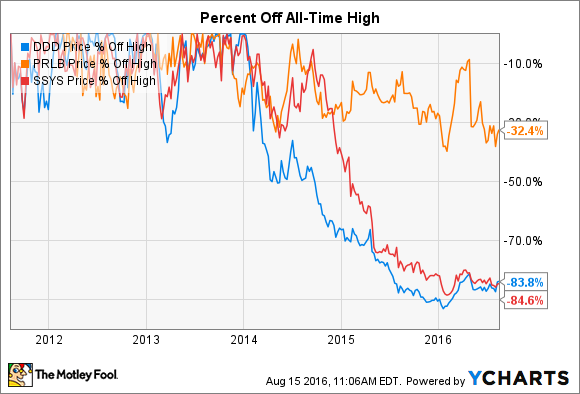 Although investors have soured on 3D printing stocks in recent years, the long-term growth prospects remain attractive. According to Wohlers Report 2014, a leading 3D printing insights report, the 3D printing industry is estimated to generate over $21 billion in worldwide revenue by 2020. If true, this growth would represent a more than fourfold increase from the $5.1 billion in revenue the industry generated in 2015.

Based on popular valuation metrics, 3D Systems' stock mostly trades at premium to the S&P 500:

Despite its premium valuation, 3D Systems faces a number of challenges that its freshly installed management team is working to overcome. One of the more concerning issues is that the company's printer sales fell 30% year over year in the second quarter -- a steeper decline from the first quarter's 17% fall.

After all, 3D Systems operates a razor-and-blades business model where 3D printer sales fuel the subsequent and repeated sale of higher-margin materials that are consumed as a printer is used. Arguably, if 3D Systems' printer sales continue to remain weak, it could undermine the potential of these future revenue streams. Going forward, 3D Systems hopes to increase demand of its printers by emphasizing manufacturing solutions.

Unlike 3D Systems, Stratasys sports a much more palatable valuation:

Aside from this notable difference in valuation, 3D Systems and Stratasys performed similarly during the second quarter. Both companies experienced falling printer sales, improved material sales, and cut costs in order to narrow their operating losses.

After a 30% fall from its all-time high, Proto Labs' stock remains richly valued:

While Proto Labs' business hasn't been hit with the customer spending slowdown that's affected 3D Systems and Stratasys since early 2015, the company's overall growth and profitability has recently begun to slow.

Specifically, Proto Labs' second-quarter revenue increased 17% year over year to a record $75 million. However, without the benefit of Alphaform AG, a German 3D printing service provider Proto Labs acquired in October, the company's legacy revenue only increased 10% year over year.

Between the three, Stratasys appears to be the only 3D printing stock that (mostly) trades at a discount to the overall stock market. However, a fallen stock price often suggests that a business has challenges to overcome. In other words, buying Stratasys could offer investors the greatest margin of safety of the group, but it could also mean that the market views the company as the lowest quality -- with the most problems to overcome.

Ultimately, investors interested in buying a bargain stock should carefully consider the health of the underlying business and its future prospects, all in the context of its current stock price.