Lincoln was the top-rated brand in the 2016 ACSI automobile report. Image source: Lincoln.

American car buyers have become more satisfied with their vehicles and that goes for people buying mass-market brands as well as luxury-car purchasers.

"Improving customer satisfaction for the auto industry is largely driven by the strong performance of mass market vehicles, which are closing the gap with luxury vehicles on many levels," ACSI Director David VanAmburg told The Motley Fool via email. "Overall auto sales may be flatter compared to the recent run of record breaking years, but they are still strong and healthy. In particular, Detroit's auto manufacturers are doing very well and competing with both Europe and Asia car makers."

That's good news for U.S. automakers (all of whom improved their scores), but it also shows the quality of all cars has improved, which takes away a major reason people used to be willing to shell out the cash required for a higher-end brand.

"The rise of mass-market vehicles may well be at the expense of luxury brands in the sense that buyers now see little differentiation between luxury cars and regular ones," said ACSI Chairman Claes Fornell in a press release. "If there is little difference, why pay more? Exclusivity may not be enough."

What did the ACSI auto survey say?

In the 2016 ACSI automobile report, of the 24 brands ranked, three showed no change, 16 improved, and five declined, three of those in the luxury space. The second-biggest drop was by Volkswagen (OTC:VWAGY), a company that spent much of the year mired in a scandal related to emissions.

It is perhaps surprising that the brand only fell 3% to a 78, putting it just above Honda's (NYSE:HMC) Acura brand in last place with a 76 ranking.

"The combination of fines and fallen stock price are a big hit to Volkswagen's finances, but it may prove even harder to recover from the reputational hit the company will take for deceiving customers and the general public," said VanAmburg. "Many customers or would-be customers could be turned-off of VW for life and it's hard to put a value on that."

All domestic automakers gained on the 2016 survey and Ford's (NYSE:F) Lincoln Brand took the top spot with an 87, after gaining 5%. Honda, despite its woes with Acura, came in second with its namesake brand, jumping 8% to score an 86. Toyota (NYSE:TM) and BMW both gained 4% over last year to tie for third at 85. 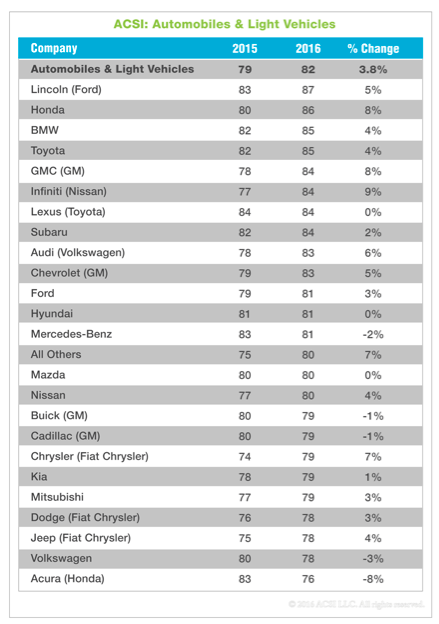 In some ways, the auto industry has become a bit like the wireless phone market. In that case, premium brands used to matter because those companies had better networks. Now, even the worst network is pretty good, so it does not make sense for people to shell out the extra cash for the premium brands.

Luxury cars, of course, have more going for them than just reliability, but consumers clearly now realize they can get a high-quality car from a less prestigious brand name. That may be good for the overall industry while removing a reason the top-tier auto brands can use as a marketing hook.

In the long run, having consumers be more satisfied with their cars should be good for the industry, and this ACSI report, which is based on 3,776 customer surveys collected in the second quarter of 2016, specifically offers hope for American brands.

"Year-to-date sales are looking pretty flat, and demand for cars may slacken some," VanAmburg said. "But the good news for Detroit is that higher levels of customer satisfaction will make it more competitive."