Overall, it's been a good year for semiconductors. Versus the greater Nasdaq Composite's return of 3.6%, the Philadelphia Semiconductor Index (SOX) has increased nearly 28%. The most interesting story in the semiconductor space is the red-hot graphics processing unit, or GPU, makers, which are outperforming the larger index by a huge margin during this period. 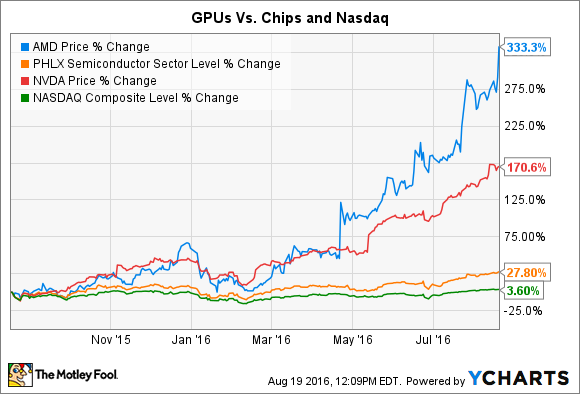 As you can see, GPU makers NVIDIA (NASDAQ:NVDA) and AMD (NASDAQ:AMD) are outperforming the greater index by a factor of 6 and 12, respectively. Additionally, comparisons between these GPU makers and the SOX don't tell the whole story of GPU outperformance, because the Philadelphia Semiconductor Index is a modified market-weighted index that includes NVIDIA -- and its 170% one-year return -- among the 30 stocks it tracks.

Even better for investors, there are still favorable tailwinds that could drive NVIDIA and AMD higher.

The incredible success of Pokemon Go points to huge demand for virtual and augmented reality. While it's important to note that the game most likely did nothing in the short term to boost either company's fortunes, the game's success nevertheless portends tremendous demand for virtual and augmented reality. This will only increase as game makers embrace the augmented- and virtual-reality formats.

Currently, the most influential company in the virtual-reality space, Facebook's Oculus, recommends AMD R9 290 and NVIDIA's GTX 970 video cards, or greater, to ensure the full Rift experience on Oculus-ready PCs. As true virtual reality increases in popularity, and the small group of VR innovators currently using VR diffuses into the larger early adopters/opinion leaders and early majority groups (see: Rogers Diffusion of Innovation graph to the left), upgraded GPUs should be positive tailwinds for the entire industry.

Here's the point: AMD and NVIDIA are the entire industry. As Jon Peddie Research notes, in the first quarter of 2016, AMD boasted 22.8% market share, with NVIDIA taking 77.2% of the add-in graphics board market. Presented another way, AMD and NVIDIA have 100% of the add-in graphics board (read: GPU) market in the first quarter. It's unlikely either of these two companies will concede a large amount of market share to another competitor anytime soon.

It's important to note that all investments have risk. One of the key risks to both AMD and NVIDIA is slowing computer shipment figures. In June, IDC announced it expected PC shipments to fall 7.3% this year, 2 percentage points lower than earlier projections. In April, chip giant Intel announced plans to lay off up to 12,000 employees, 11% of its workforce, as the company has struggled in the wake of falling PC sales. On the surface, it would appear the factory-installed GPU market would suffer as shipments continue to fall.

Another risk is that both companies are considered "expensive" by traditional metrics. NVIDIA trades at a price-to-earnings ratio of 41 times, and AMD has struggled with profitability, posting a rare quarter of GAAP profitability in the second quarter with the help of a gain on the sale of equity interests of a joint venture to China in the recently reported second quarter. However, analysts polled by Yahoo! Finance estimate annualized growth of 24% and 49%, respectively, over the next five years. If VR really is "the next big thing" in tech, it's likely those figures will be higher.