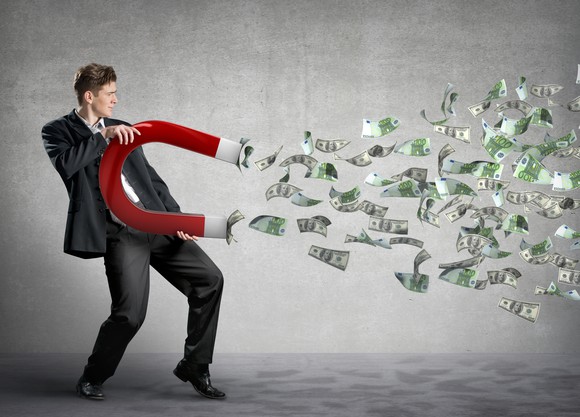 Home runs are fun to watch in baseball, but they're even more exciting in investing. Multi-baggers -- that is, investments that gain over 100% -- can make all the difference in your portfolio. Many investors know about the more famous home-run stocks (think Netflix, Amazon, and Disney), but not every great investment is a household name. Many of them operate in niche industries and might best be described as "boring."

In the hunt for multi-baggers, boring can be an investor's best friend. These three healthcare stocks are proof of that. 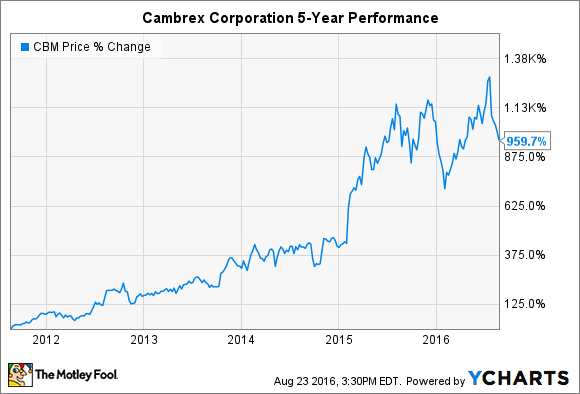 Cambrex Corporation has returned about 960% in the last five years. The company manufactures active pharmaceutical ingredients, or APIs, that power generic and innovator brand drugs that treat conditions ranging from asthma to dementia to pain. In addition to manufacturing APIs for approved drugs, Cambrex Corporation helps to scale up the manufacturing process for new APIs being investigated in clinical trials. This business model allows the company to avoid the risks associated with clinical trials and costly R&D while enjoying all the benefits of growing drug sales from its customers, which include the largest companies in the pharmaceutical industry.

The contract manufacturer has grown sales from $276 million in 2012 to over $433 million in 2015 -- that's 57% growth. While operating income has increased 155% in the same period, investments in business and facility expansions have limited earnings-per-share growth in the last several years. For instance, Cambrex Corporation recently completed a $50 million upgrade of its Charles City, Iowa facility, adding 7,500 square feet of manufacturing space, a new 36,000-square-foot cold-storage warehouse for its high-value inventory, and the ability to work with more potent APIs. The company also created a 7,500-square-foot manufacturing space that can be customized to customers' needs.

Continuous investments in growth have no doubt fueled Cambrex Corporation's five-year tear, but it isn't done yet. The $1.4 billion company recently raised full-year guidance, telling investors to expect revenue growth of at least 10% and free cash flow of at least $60 million. You won't get rich overnight by investing in this stock, but it offers one way to enjoy the wild growth of the pharmaceutical industry -- at a safer distance. 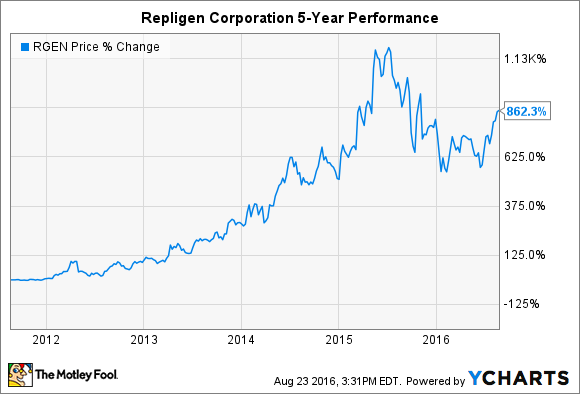 Repligen Corporation has returned over 860% in the last five years. The company sells a range of products that are required for biological drug manufacturing -- again avoiding the risks of drug development and clinical trials. The current portfolio includes single-use chromatography columns for purifying antibodies and other proteins, devices for concentrating cells before fermentation, and growth factors for boosting cell productivity during fermentation. Repligen Corporation is also the world's largest manufacturer of protein A, which is used inside chromatography columns and molecular biology experiments to purify biological products. The company boasts customers including Thermo Fisher and General Electric.

Repligen has grown sales from $63 million in 2014 to $83 million in 2015. (Prior to 2014, Repligen Corporation enjoyed generous royalty payments from Bristol-Myers Squibb on a drug it formerly owned, which makes comparisons to earlier periods a bit more complicated.)

Investors certainly don't have anything to complain about: Management responded to the expiration of its royalties by making several acquisitions to bolster its product lineup, and full-year guidance for 2016 calls for at least $101 million in revenue and at least $17 million in operating income. Furthermore, Repligen closed a $100 million debt offering in the second quarter of this year -- the first time the company has ever taken on debt -- which could allow for future acquisitions or expansions. The $1 billion company should be able to continue riding the growth of the biopharmaceutical industry for the foreseeable future. 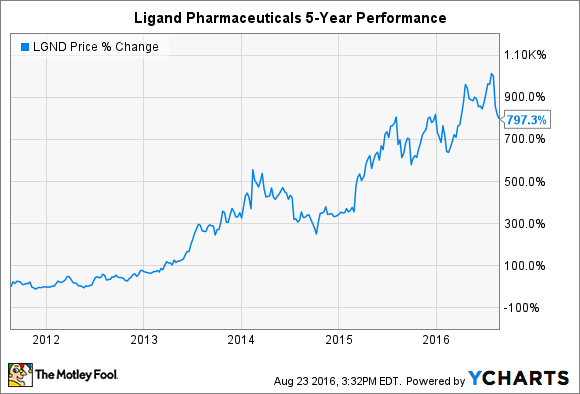 Ligand Pharmaceuticals has returned nearly 800% in the last five years. The company pursues drug development with a twist, only investing in drug discovery, early-stage investment, and product reformulation. In other words, its business model is to de-risk the beginning stages of drug development and then license assets to pharmaceutical-industry partners that will continue with riskier, more expensive late-stage development. That allows Ligand Pharmaceuticals to pursue dozens of potential drug candidates with a variety of potential uses, rather than focusing all of its efforts on related molecular classes or diseases.

The low-cost drug discovery company boasts a portfolio of more than 150 assets, including 11 marketed drugs such as Promacta (developed in partnership with Novartis) and Kyprolis (Amgen). Sales grew a remarkable 132% from $31 million in 2012 to $72 million in 2015. While the company's trailing 12-month EPS is skewed by tax benefits received in the third quarter of last year, Ligand Pharmaceuticals remains comfortably profitable. Operating income nearly tripled from $19 million in 2014 to $55 million in 2015.

The ride should keep getting smoother for investors as Promacta and Kyprolis drive growth in the years ahead. Full-year guidance for 2016 calls for at least $115 million in revenue, compared to just $72 million last year.

What's the best way to invest in a multi-bagger?

Time, more than anything else, determines whether your investments will be home runs. Anyone could have purchased Cambrex Corporation, Repligen Corporation, or Ligand Pharmaceuticals five years ago, but those who sold at the first sign of weakness or knee-jerk market reaction would have missed their chance to enjoy 700%-plus gains. A buy-and-hold strategy that prioritizes the long-term view, keeps emotions in check, and focuses on solid companies is truly the best way to find multi-baggers. And, of course, a little luck can go a long way as well.