Whenever a comapny has a distribution yield as high as Suburban Propane Partners' (NYSE:SPH) payout, it is definitely worth taking a deeper dive into the company's business to see what the company is all about -- and whether this high yield is a fluke or something worth putting on your investing radar. One great place to start is to get a pulse of what management is thinking in the company's most recent conference call. Here are five of the most revealing quotes from Suburban Propane's most recent quarterly call.

Typically, when a company's CFO says "consistent" and "loss" in the same sentence, there is something fishy going on with the company. Surprisingly, though, this is something that is common in Suburban's results, and it isn't a bad thing. Here's what CFO Michael Kuglin said about the company's most recent results:

For someone who is new to the propane business, seeing losses a few quarters out of the year can be a little scary. For Suburban, though, this is pretty par for the course because its results are very lumpy based on the seasons. Basically, the company makes its hay in the winter months when home heating demand is the highest. As you can see in this chart, this has been a pretty consistent trend for the past decade. 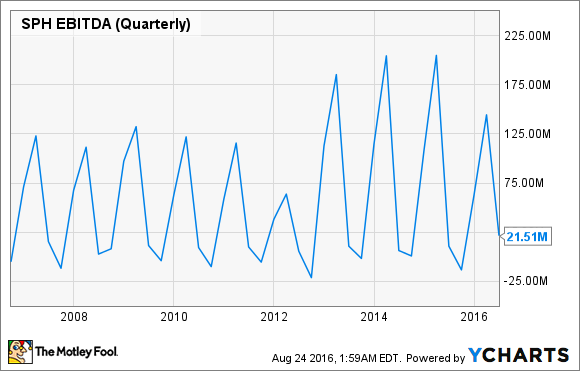 Baby, it's not that cold outside

The majority of Suburban's propane transport and delivery is used for heating purposes. This means that the weather is a larger determining factor in the company's results than anything else. As Kuglin put it, this past quarter was slightly more favorable.

Although weather during the third quarter typically has less of an impact on volumes sold than it does during the heating season, volumes for the quarter benefited from cooler spring temperatures, especially in our Northeast service territories in the month of May, where average temperatures were 17% cooler than normal. Overall, average temperatures across our service territories for the third quarter of fiscal 2016 were 9% warmer than normal and 7% cooler than the prior year.

A real key of that statement is that this past quarter doesn't have as much impact as the heating season. As you can see from the chart above -- and if you remember this past winter -- this past heating season was pretty dismal.

Unlike many other master limited partnerships, Suburban hasn't been reliant on the capital markets for more than two years. A lot of that has to do with the fact that the company's business isn't as capital intensive as others, but it's also because the small amounts of capital spending the company has done have been funded by operational cash flow. That being said, the company does have a debt load that has become a little more onerous than normal, thanks mostly to the warm winter. According to Kuglin, this has put the company's debt metrics in a pinch, but he sees it as a rather manageable position.

During the third quarter, we once again funded all working capital needs from internally generated cash without the need to borrow under our revolver. And from a leverage perspective, the increase in adjusted EBITDA for the third quarter contributed to an improvement in our leverage compared to the second quarter. While our leverage remains elevated compared to historical levels as a result of the impact of the 2016 record warm heating season on trailing 12-month earnings, we are well within our debt covenant requirement of 5.5 times debt to EBITDA. Going forward, the return to a more normal weather pattern would bring our leverage profile more in line with our target of mid to upper 3 times.

Despite the challenges of the recent winter and the deteriorating debt metrics, management still has quite a bit of confidence in the company's results because -- according to CEO Michael Stivala -- it saw an opportunity to raise its payout to shareholders.

[W]e were pleased to declare our quarterly distribution of $0.8875 per common unit, which equates to an annualized rate of $3.55 per common unit. ... Despite the very challenging winter season, our unitholders should take comfort in the sustainability of our distribution as a result of our conservative approach toward balance sheet management and strong liquidity position. As for the remainder of fiscal 2016, we will continue to focus on the things within our control: customer-based management, prudent margin management, further operating efficiencies to drive cost savings, and preparing our operations for the upcoming heating season, regardless of what the weather brings.

With a distribution yield of 10.4%, investors shouldn't expect much dividend growth. Then again, with a yield that high, the company's distribution growth can be pretty slow, and investors can still generate a decent return over time.

Wholesale and retail distribution of propane is a very mature business that doesn't exactly have a lot of organic growth. The good thing for investors, though, is that it is a very fragmented market that provides lots of merger and acquisition opportunities to consolidate the market. According to Stivala, there are lots of opportunities on the radar that Suburban is ready to pounce on when the timing is right.

[T]his is obviously the time of year that smaller mom-and-pop businesses would put their businesses for sale, so you're seeing the similar number of businesses on the market, but we've talked about this in the past. Our process with respect to propane M&A is a little different than some of the others where we have more of a target list ... of good quality businesses and good quality markets of ours that we have our eye on. And that we have built relationships with the owners of those businesses such that when they're ready to sell, we're in a better position to help make that happen. So we have a handful of those on our list of watch, and I would say we have a couple in the backlog right now that we're continuing to look at.

Mergers and acquisitions have been a big part of Suburban's business for some time. Based on this statement, investors shouldn't be itching for a deal to happen tomorrow, but the comapny does seem to have some irons in the fire that should lead to growth in the future.