Microsoft (NASDAQ:MSFT) may have mostly given up on getting people to adopt its own Windows Phone platform, but that has not stopped it from going after smartphone users.

Since Satya Nadella took over as CEO, the company has been aggressive on making its software available on whatever platform would have it. That was a reversal of earlier policies under Steve Ballmer, in which products like Office and Skype were largely kept as Windows exclusives.

That strategy made sense when Microsoft dominated the PC market, with Apple (NASDAQ:AAPL) as a niche competitor. It became less logical when the rise of smartphones and tablets running iOS or Alphabet's (NASDAQ:GOOG) (NASDAQ:GOOGL) Android gave consumers choices. Windows was no longer the default computer operating system in part because the definition of computer has changed to include tablets and smartphones.

Under Nadella, Microsoft has been aggressive in bringing its proprietary software to Android and iOS, which includes offering free limited-function (but still useful) versions of the Office apps. That has helped the company change its image as a company that does not play well with others.

Now, Microsoft has made a partnership deal that should help it fight a major advantage Alphabet has when it comes to Android devices. 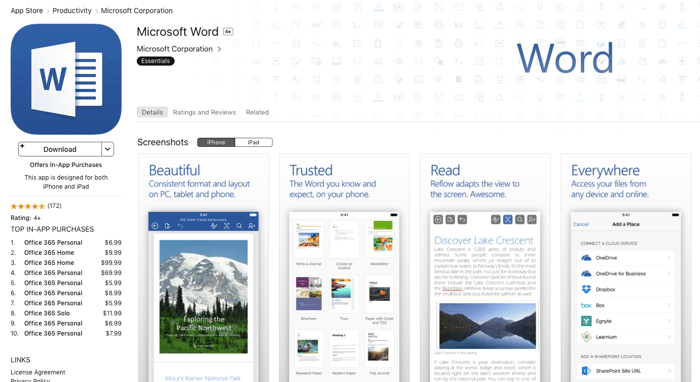 As the creator of Android, Alphabet's Google can preload it with its own apps, including its answer to Office and Skype. Pre-installed software on phones can be a big tactical advantage when it's useful or it can be ignored entirely when it's perceived as bloatware.

Google's Office-like apps, and even its Skype knockoff, Hangouts, likely fall into the useful category. If they come already loaded on someone's phone, that person may not seek out alternatives like Microsoft's productivity suite. Google Docs may not be as good as Word, but on a phone or tablet, the differences may not be enough to get consumers to uninstall one to add the other.

To counter Google's inherent Android advantage, Microsoft has made a deal with Lenovo (OTC:LNVGY) to preload some of its productivity apps -- including Office, OneDrive and Skype -- on select Lenovo Android devices.

Neither company has specified exactly which devices or how many the deal entails, but Microsoft did note that "Lenovo expects to ship millions of these Android-based devices worldwide over the next several years," in an Aug. 22 press release. In the first quarter of this year, Lenovo dropped out of the world's top five smartphone vendors, according to IDC, after ranking No. 4 with 20.2 million shipped in the fourth quarter of 2015. For tablets, IDC put Lenovo at No. 4 in Q4 2015 with 3.2 million units shipped.

"Microsoft's thrilled that our productivity apps will be pre-installed on Lenovo's premium devices," said Microsoft OEM VP Nick Parker. "The marriage of Microsoft's apps and Lenovo's Android-based devices will enable customers around the world to be more productive, more connected and achieve even more."

This deal follows Microsoft making similar arrangements with LG, Samsung, and Xiaomi to preload its software on devices made by the various companies. In most cases, Geekwire noted, Microsoft forgoes some royalties in order to have its software in front of more consumers.

This is smart for business

Microsoft was slow to react to the smartphone and tablet revolution, but it has made up for that in recent years by being very aggressive. This type of deal puts Office and Skype -- two category-leading programs -- in front of more people. That should lead to higher adoptions and fewer people leaving (or never joining) in favor of Google's inferior knockoff options.

This is Microsoft continuing to play offense after years of simply trying to defend its turf. It's a smart strategy that will make Office, Skype, and even OneDrive stronger in the long run.