Making money in sports isn't limited to millionaire athletes and billionaire team owners. Regular investors like you and me can cash in too. In fact, sports-related spending is incredibly sticky: Last month TD Ameritrade sponsored a survey that found parents of children in competitive youth sports spend $100-$400 more per month and are even delaying retirement to pay for their child's athletic costs.

Regardless if you're a soccer mom, a hard-core athlete, an athleisure fan, or simply an investor looking to capitalize on sports-related spending, here are five companies to put on your watch list: 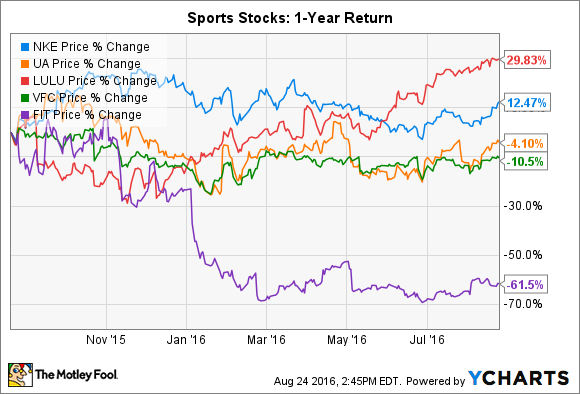 Nike continues to take advantage of big events and endorsements

Using a Star Wars analogy, Under Armour's (NYSE:UAA) (NYSE:UA) amazing 2015 was akin to the first (real-world chronological) Star Wars film with the company starring in the role of the Rebel Alliance. Under Armour's footwear arrived in a major way mostly due to endorser Steph Curry's amazing season that culminated in a NBA title, Finals MVP, and Regular Season MVP. At one point Under Armour reported 64% year-over-year footwear growth.

For Nike (NYSE:NKE), however, 2016 represented a The Empire Strikes Back moment, at least as it relates to marketing and optics. On the court, megaendorser LeBron James battled back from a two-game deficit to beat Curry's Golden State Warriors in the 2016 NBA Finals. Additionally, Nike appeared to score a major coup when Under Armour's Michael Phelps was photographed wearing Nike sweatpants on the cover of Sports Illustrated. Analytics firm Apex Marketing pegs this snafu resulted in $453,000 of free brand exposure for Nike at the expense of Under Armour.

In other Olympic events, Nike's track-and-field business showed its dominance with its ubiquitous yellow-and-pink Zoom Victory Elite 2 shoe (on the left) on display in most sprinting events and on multiple Olympians. USA Men's basketball turned in Gold-medal performance: Nike has endorsements deals with nine of the 12 athletes. Nike ended fiscal year 2016 by increasing revenue 6% and EPS of 17% on a year-over-year basis and has seen its stock increase nearly 10% over the last one-year period.

2016 has been a rare down year for Under Armour

In sports, it's easy to see competition as win or lose. In business, however, this is a false narrative. Under Armour is the best example of this key difference between sports and business. While it's true Under Armour failed to follow up its near-flawless 2015, certainly on optics (as discussed above), 2016 has seen the company continue to execute operationally. Through the first half of 2016, Under Armour increased its revenue 29% over 2015's totals.

Under Armour's biggest opportunity going forward may be the international market. While its North American business increased 24% over 2015's totals, the company's International segment increased 62% during this time frame. As a point of comparison, approximately 52% of Nike Brand revenue is outside of North America while that figure is only 15% at Under Armour.

Under Armour may have missed an opportunity during the Olympics, but is taking Steph Curry on a five-day trip to the Middle Kingdom in early September. Earlier this year Under Armour's CEO Kevin Plank attributed a 157% increase in online sales to China; look for Under Armour to continue to grow its top line with strong participation from its International segment. Under Armour's A shares have lagged over the last year on valuation concerns, but should power higher if the company continues to perform.

Fitbit is a play on connected fitness Interestingly enough, International hasn't been Under Armour's fastest-growing segment. That designation goes to its Connected Fitness segment, which reported year-over-year growth of 91% throughout the first six months of 2016. The pure-play leader in wearable tech is Fitbit (NYSE:FIT). The company has certainly struggled over the last year with shares down more than 60%. During the last six months, the company has nearly tripled research and development expenses, which should pay off in better products going forward.

As a result of the 60% sell-off, shares now trade at 12 times forward earnings, which is relatively inexpensive for a high-growth company. IDC expects connected wearables to grow 20% per year through 2020 and Fitbit should be able to benefit from this trend. Analysts tend to agree, the one-year price target based on analysts polled by Yahoo! Finance is $21.38 -- approximately 50% higher than its current price.

In the apparel industry, athleisure remains a rare bright spot. The company that essentially created the industry, lululemon (NASDAQ:LULU), appears to be righting the ship. The company reported year-over-year top line growth of 17% last quarter with comparable store sales increase of 8% on a constant-currency basis.

The company has struggled recently as statements from founder Chip Wilson, a recall on see-through yoga pants, and an odd board of directors conspiracy have overshadowed the company's operational performance. The recently reported quarter appears to represent a distraction-free company and portends better performance in the future.

Another way to invest in athletic-focused gear is apparel conglomerate VF Corporation (NYSE:VFC), which boasts outdoor-athletic focused brands The North Face, Timberland, Vans, Reef, and athleisure-focused Lucy. On the surface, VF's Outdoor and Action Sports division has struggled in 2016 with revenue up only 2% with segment profit down 11.3%. That said, I'm encouraged by the 12% direct-to-consumer (read: company-owned stores and e-commerce) revenues. Weakness appears to be in the company's wholesale business. VF's profit margins were negatively affected by currency impacts, which should ameliorate going forward.