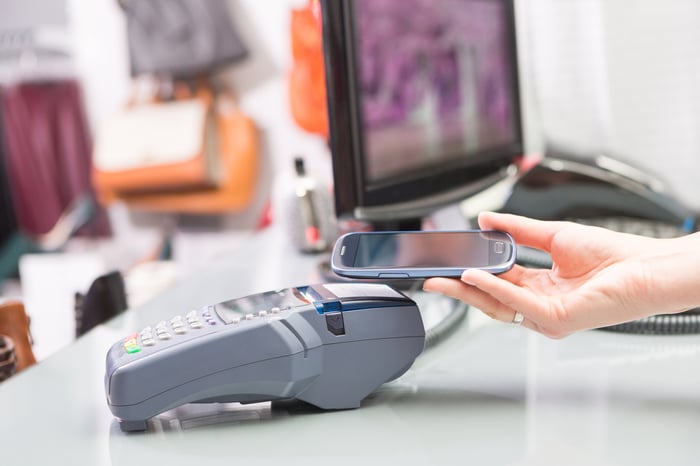 PayPal (NASDAQ:PYPL) is doing quite well as a business, and the company reported rock-solid financial performance for the second quarter of 2016. However, investors don't seem very impressed: PayPal stock is down by nearly 10% from its highs of the last year due to market negativity about a recent deal that the company made with Visa (NYSE:V).

It's still too early to tell what the full financial impact the agreement with Visa will be on PayPal's business, but the company is probably making the right move from a long-term perspective. In any case, the market seems to be missing the big picture when it comes to PayPal stock.

PayPal used to encourage customers to link their PayPal accounts to their bank accounts via ACH as opposed to their Visa cards in order to circumvent Visa's payment processing fees. This will no longer be the case after the agreement; PayPal will make it easy for customers to choose either bank accounts of Visa cards, and the company promises to make the transition as smooth as possible for those who want to switch from bank accounts to Visa.

The complete financial details of the agreement were not disclosed, but it will most likely have a negative impact on PayPal's profit margin on transactions due to a higher share of those transactions going through Visa. PayPal will receive economic incentives based on volume, and Visa will also offer increased certainty regarding fees over the long term. Nevertheless, the agreement will still probably hurt PayPal's margins in the coming quarters.

On the other hand, PayPal is joining the Visa Digital Enablement Program, which means that PayPal's digital wallet will be easily accepted at all physical stores where Visa contactless transactions are enabled. Essentially, PayPal is partnering with one of the most powerful brands in the payments industry, which could mean significant opportunities for growth over the years and even decades ahead.

Visa will now be a valuable partner for Paypal as opposed to a competitive threat, and this is clearly is a big consideration to keep in mind when analyzing the agreement and its long-term implications.

PayPal operates in an industry offering tremendous potential for growth. Nearly 85% of all global consumer transactions are currently being made in cash, and the lines between traditional retail, online commerce, and digital wallets are increasingly blurring. PayPal management estimates that the company's total addressable market is worth nearly $100 trillion.

The most important thing for PayPal at this stage is securing a big share of that massive growth opportunity, even if it comes at the expense of the declining margins per transaction. For this reason, the long-term benefits of the agreement with Visa could easily outweigh the costs.

PayPal is on fire

Moving beyond the partnership with Visa, PayPal is clearly firing on all cylinders. The company ended the second quarter of 2016 with 188 million active customer accounts, an increase of 11% versus the same quarter in 2015. The platform processed 1.4 billion payment transactions during the period, growing 25% year over year. Total payment volume reached $86 billion in the quarter, growing by 29% in constant currency terms.

A key metric to watch is transactions per active account, which increased 13% year over year last quarter. This is a key positive for investors since it shows that customer engagement levels are rising. PayPal's social payment platform, Venmo, is also doing remarkably well, with total payment volume increasing by 141%, to $3.9 billion.

Total revenue amounted to $2.65 billion, growing 16% in U.S. dollars and increasing 19% in constant currency terms. Profit margin shrank during the quarter, but this was due to a combination of one-time factors such as the amendment of the company's co-branded credit card agreement with Synchrony and the sale of credit receivables. Excluding one-time items, management calculates that operating profit margin would have increased by nearly 100 basis points versus the second quarter in 2015.

The deal with Visa means that PayPal is prioritizing long-term growth potential over current profit margins, and this is not necessarily a bad thing for investors in the company. On the contrary, considering the size of the opportunity in the payments industry, I would say management is making a smart decision from a strategic perspective.

In addition, PayPal's key operational and financial metrics are all moving in the right direction, and the business looks fundamentally solid across the board. The market is having a limited and short-sighted approach to PayPal stock, and this could be creating a buying opportunity for investors.